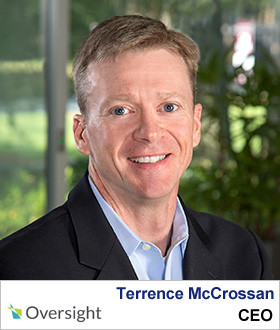 Since Terrence McCrossan became CEO of Atlanta-based Oversight Systems two years ago, both company revenue and employee headcount have nearly doubled. “We had a fantastic foundation to build on, with great people and leading technology,” he says. “My focus was to challenge the organization to “think big” and hit the sales accelerator, which we have done by redefining our mission, aligning our priorities, bringing in more great people and empowering our employees to drive change.”

McCrossan was born in New York City and grew up in the town of Warwick, NY, but has worked in Atlanta for 25 years, mostly for larger organizations. “I believe the discipline I learned from large company leadership experience helped prepare me for the role of CEO at Oversight,” he says. The company today has 125 employees and quite an impressive list of clients – including many of Atlanta’s most notable brands.

Oversight uses Artificial Intelligence technology to automatically monitor employee spend for potential fraud, waste or misuse in activities such as expense reports, purchasing cards, e-Procurement purchases, and billing/AP. “About 50% of any large company’s spend is in the primary areas we cover – card-based spend, accounts payable spend and procurement,” he says.  Most organizations attempt to audit this spend manually.  Oversight uses technology to significantly increase the effectiveness and reduce the effort required to identify and manage this risk.”

McCrossan is excited about Oversight because no other company can check for financial fraud or mistakes over so large a spectrum. “There are a few companies that do part of what we do, but none do it all,” he says. “Audit teams in companies, especially large ones, can’t look at everything, nor should they have to,” he says. By leveraging the company’s AI framework and unique data sets, one-off errors as well as patterns of concern can be found automatically.

Speaking of competitors, McCrossan says the company is basically competing with the manual audit process. “As a result, our sales process is an education process where we show how much more can be done with technology” he says.

Founded in 2003, Oversight is proud of its Atlanta fintech heritage, but has been flying under the radar until recently. For McCrossan, accelerating Oversight’s path to growth meant building up the company’s sales, marketing and product expertise and also organizing the company around an ambitious goal. “We intend to become the world leader in how companies manage spend,” he says. The work over the last two years has put Oversight on the map in Atlanta.

Focusing on the Fortune 2000, Oversight counts approximately 200 of them as customers today and the list is a veritable who’s who – from global pharmaceutical companies to the world’s largest technology firms. With their growing footprint and expertise, they now have the capacity to add many more satisfied customers.

“When I was considering the opportunity to join Oversight over two years ago, I remember walking into the company office and seeing the logos of all its current customers and then thinking to myself that this company is certainly doing something right,” he says. “As I learned more about the people and fantastic technology, and that they wanted me to be a growth accelerator, which was something that I was confident I could do, I jumped at the chance.

In fact, McCrossan felt that it was the chance of a lifetime. “As CEO, I get to build a culture of success across all areas of the business and help build new leaders as well. The role has been everything I hoped it would be.”
Married and the father of two, McCrossan describes himself as an overall sports fanatic who enjoys playing tennis regularly.