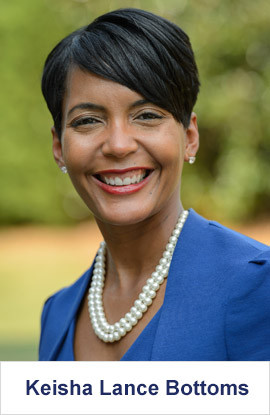 Keisha Lance Bottoms will be the new Mayor of Atlanta. Bottoms was elected by a vote of 46,667 to 45,835 for fellow city councilor Mary Norwood. Bottoms has been a member of the Atlanta City Council since January 4, 2010, representing part of Southwest Atlanta.She will take office in early January.

Bottoms was endorsed by outgoing mayor Kasim Reed, who defeated Ms. Norwood by a similar margin eight years ago. The mayor said, “I congratulate Mrs. Norwood on a hard fought campaign and am pleased that this election has come to a close. We can now focus on moving our City forward and I will continue to work with Mayor-Elect Bottoms on a smooth transition.”

Norwood conceded the election on the evening of December 20th, more than two weeks after the Dec. 5 runoff.

In addition to her service on the Atlanta City Council, Bottoms has also served as Executive Director of The City of Atlanta and Fulton County Recreation Authority (AFCRA). As Executive Director of AFCRA, Keisha is the chief executive officer of the organization that owns and oversees operations for iconic recreation and entertainment venues across Atlanta, including Turner Field (home of the Atlanta Braves), Philips Arena (home of the Atlanta Hawks), and Zoo Atlanta.