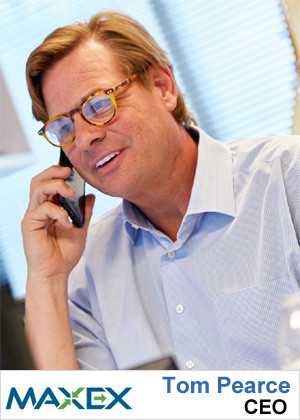 The Most Important Fintech that you have Probably Never Heard Of

Atlanta based MAXEX is the first digital exchange for the residential mortgage market. “We create liquidity,” says Tom Pearce, CEO of MAXEX. Launched in 2016 in partnership with JP Morgan, MAXEX puts together buyers and sellers of loans to provide efficiency, as well as liquidity, to the $2.5 trillion per annum mortgage loan market - the largest credit market in the world. “We are the only digital marketplace that enables mortgage buyers and sellers to trade through a single clearinghouse,” he says.

With a long career in - and deep understanding of - the mortgage marketplace, Tom started MAXEX as employee number 1, with his dog Biscuit as employee number 2. “I started the company with a few local investors like Dan Baldwin, Bert Ellis and Tom Noonan along with co-founder Bill Decker, previously the founder and CEO of Lydian Data Services. Bill oversaw operations and technology,” he says. “He and I were the core subject matter experts in the business and technology of the mortgage trading business.”

Biscuit continues his work at the company as Vice President of Corporate Morale.

Taking lessons learned from the 2008 market crash, Tom knew that a more efficient and transparent marketplace was needed, but that the complexity of the mortgage trading business had prevented anyone from digitizing the backend of secondary mortgage market before. “My investors were very encouraging,” says Tom, “they basically told us that if anyone could pull it off, Decker and I could.”

The term “secondary market” is frequently heard but not fully understood by the public. “The secondary market means nothing more than that a lender who has just closed a loan with a borrower – and now holds a mortgage loan, and is now selling that loan to another investor,” says Tom. Approximately 75% of all mortgages closed in the US are then sold in the secondary market and the balance remains on the balance sheets of the originators as portfolio assets. MAXEX facilitates the purchase of the mortgage loan and the buyer is the one that normally bundles that mortgage into one of many loans in a securitized instrument that is then sold as a security to bond investors.

He encountered the biggest problem that the company would face immediately. “To have a marketplace and centralized clearinghouse, we needed everyone to play by the same rules,” says Tom, “it was hand-to-hand combat in the beginning to get the first financial buyers and sellers to adapt and agree to standardized documents and processes.”

With trading volume expected to exceed $20 billion this year, Tom says that 90 percent of MAXEX’s business is non-conforming and jumbo loans, although it is also approved by Fannie Mae and Freddie Mac to trade conforming loans as well. “The conforming residential loan market is generally loans of $550,000 and below which are sold to Freddie and Fannie,” says Tom, “and these days, many, many loans exceed that loan amount, and MAXEX can accommodate loans up to $3 million.”

Tom’s company dramatically reduces the cost for loan buyers of acquiring loans and achieves optimal liquidity for originators/sellers thereby creating significant efficiencies for both sides of the market. “Without MAXEX, the larger players incurred high overhead and many employees to maintain hundreds of counterparties for buying and selling loans,” says Tom, “something that the smaller players could not replicate. We have leveled the playing field for smaller players while reducing costs for the big players.”

MAXEX makes money via a combination of transaction and clearing fees. As a true clearinghouse that serves as the buyer of the loan from the seller while simultaneously being the seller of the loan to the buyer, its $500,000,000 in credit facilities allow customers to combine transactions into a single settlement, which helps reduce many friction costs.

Tom is certain that MAXEX has the potential to become much larger. “We provide buyers the ability to purchase exactly what they want by loan type and state,” he says, “and we provide sellers with 20 to 40 potential purchasers, instead of the usual two or there.” As profit margins in the industry become squeezed, market players are seeking ways to reduce their transaction costs and will use MAXEX, he says.

MAXEX ultimately helps the individual home purchaser by reducing the costs of mortgage transaction and removing friction from a complex market. “We are excited about the future,” says Tom. “As with many technology companies, Covid – 19 confirmed our model, and we see 2021 as our biggest year ever.”

5 Mistakes to Avoid When Buying a Car this Tax Season

The home depot premieres documentary film "hope builds," offering behind-the-scenes look at natural disasters and what it takes to rebuild