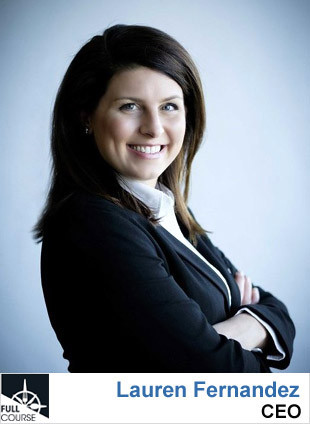 The Full Course on Restaurant Growth

Lauren Fernandez, Restaurant Investor, Developer and CEO of Full Course, gives clients the 411 on scaling their businesses. With years of experience, she and her team help small restaurant owners grow their way up to exponential profits.

"It's takes a lot of hard work to be successful in the restaurant business," she says, "these are usually family businesses of one, maybe two, locations. While these successful units are incredibly satisfying - and can provide a great lifestyle to the owner and their families - they never reap the exponential rewards that would accrue to a group of 10 to 12 restaurants. That's where Full Course comes in. Owners normally can't scale on their own without difficultly, but with our help, they can."

Lauren came into the restaurant business by way of the law. Graduating from the Emory School of Law and the Goizueta School of Business in 2006, she went to work for Gardner Groff, a boutique intellectual property firm, where she worked primarily on trademark and licensing matters. "In my third year, I was seconded to Novartis eye care division, specifically to manage their trademark portfolio and work on a new contact lens product lauch," she says. "I was working seven days a week between the firm and that assignment, but loving the work.” Finally, Novartis made me an offer, putting two legal jobs together to create a spot for me on their team. They did, and she became Associate General Counsel and Head of Trademarks and Domains at Ciba Vision.

As the lead attorney on the Product Launch team for Dailies® Total1®, she was charged with the development and commercialization of product from Research and Development on a rapid basis. "The new product,Dailies® Total1®, was one of the first of it’s kind as an FDA-approved wetable contact lens. We also had to achieve similar approvals in 140 other countries. It was a lot of work," she says, "but the product was very successful."

In 2011 an MBA peer from her time at Emory called Lauren and asked her if she would meet with the CEO of Focus Brands, the parent company of Carvel, Cinnabon, Jamba, Moe's Southwest Grill, McAlister's Deli and Schlotzsky's - 5,000 locations in all. "We met for coffee, then a lunch meeting and then another lunch meeting," she says. Eventually, she was offered the chance to join Focus Brands to run their Legal Department, and to help develop their licensing program.

“Multi-billion dollar products like Dailies® Total1® aren't launched every day, and I was ready for a new challenge. Focus Brands offered me an opportunity to build a legal team and have more contact with people. I immediately felt that the food business was more aligned with my personality."

Understanding that she would need to be much more hands on with all aspects of the business, Lauren immediately was put into training for each of the six brands. "I learned as much as I could about the restaurant business," she says, "and I thought it was wonderful. I liked the fact that I was more than just a lawyer and the people were great. I developed tremendous respect for people who work in the restaurant business at every level."

Lauren grew her department from two to 25 people and was very proud of the work that she did at Focus Brands. But after three years the executive team decided to move in another direction. After helping to select her replacement and then working as a consultant for some time, she started her consultancy The Fernandez Company and her first restaurant development firm Origin Development Group in 2015.

Armed with a multi-milion development fund, Origin Development Group became the then largest multi-unit franchisee of Chicken Salad Chick®, a fast casual concept first developed in Auburn, Alabama. Says Lauren, "we started with one location in Georgia and grew it to 11 locations in three years. In December 2018, we sold our franchises back to Chicken Salad Chick."

It had been an enormously successful, profitable, three years for Lauren and her partner. "It was exhausting, exhilarating, and the most intense experience of my life," she says, "but in the back of my mind I kept thinking ‘this shouldn't be so hard.'"

Lauren took a year off after the sale of Origin, but she knew what she wanted to do next.

"70% of all restaurants in the US are one or two locations businesses. I kept asking myself: how do I solve for the dilemma of hard working owners not being able to scale and realize greater wealth from all of their hard work? I began really formulating the value proposition for Full Course," she says.

Full Course focuses on restaurant owners with one or two locations who have a desire to grow to at least 10 locations. "With 10 units you become a target for larger private equity groups, and all the money and growth potential that comes with it."  Full Course provides the capital for growth as well as the expertise for the single unit business to grow. Most importantly, and does not take a majority interest.

"It's an investment desert for restaurants with fewer than 10 units," she says, "and we are filling that gap. We have the expertise to locate both the owners and concepts that have growth potential and then move them forward with a sustainable growth strategy.”

Full Course starts by doing a Restaurant Initial Assessment to determine where the restaurant is in terms of both finances and operations. Lauren and her team of subject matter experts then offer owners a plan for Restaurant Optimization, a process of three to six months. At the end of Restaurant Optimization, clients progress to Development Planning, where the Full Course team works side by side with owners to develop a growth playbook which includes multiple channels of revenues including traditional restaurant construction, developing new products, as well as possibly franchising. "We're an incubator, an accelerator and an investor," says Lauren. "We deploy capital, write the playbook, coach the playbook and get the owner to a touchdown. It's a collaborative process."

Lauren believes that her approach is both novel and fair.

A $20 million fund is being raised and approximately $3 to 4 million per brand will be invested. There is also an aggressive plowback from cash flow that the owners agree to upon entering into investment from Full Course. Lauren has personally invested in the fund.

Five restaurant owners have already agreed to come on board, and Lauren sees the demand and client pipeline already necessitating a second $20 million fund in the very near future. "We have the recipe," says Lauren, "and this is just the beginning. For every five to six restaurants that we bring on board, another $20 million fund raise."

Without giving away her secret sauce, Lauren says that there are common issues usually seen that make it hard for single unit operators to scale on their own. "First, the owner is doing too much of the work themselves. This makes it impossible to scale, so they have to learn to delegate. Second, they trust their gut too much. While their gut instincts got them a successful unit, we preach 'Trust your gut, but verify with accounting.' Everything has to be verified with data. Lastly, manage the people who work at the units properly. We teach that these workers actually come first and the customers come second. You can't scale without good workers and retention matters," she says. "Also, many restaurants have cultural challenges that prevent them from breaking into the main stream. If the owners sincerely want to extend their brand over multiple units, we can certainly help with that," she says.

Lauren's Full Course team consists of a Consulting Team to help on consulting side for clients, covering a number of subject matter experts in finance, accounting, marketing, human resources, company culture, as well as talent recruitment and retention . In addition, Full Course has an entire network of Development Team, which includes project managers, as well as vendor partners for real estate, construction, architecture and interior designers.

"We're excited to be bringing capital and expertise to a previously neglected small business category," says Lauren. "I want these owners to have the same financial rewards and experience that I had as an owner and operator. The rewards are fantastic, but they deserve them."