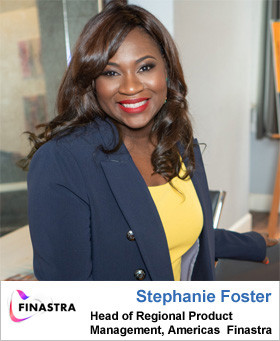 Advancing Women in Payments and Fintech

Starting as an intern at Western Union nearly two decades ago, Stephanie Foster worked her way up to manage more than $50 million in revenue and over 1,000 agent locations in 13 territories. Now living in Atlanta, Stephanie leads product commercialization in payments for Finastra, the world’s third largest fintech. “My ultimate career goal is to reach the C-suite. On evenings and weekends, I work to empower other women to relentlessly pursue their dreams as well,” she says.

Stephanie was born in Haiti and lived there until the age of 15 when the family moved to Fort Lauderdale, Florida. Transitioning from your birth country to a new place can challenging for many, but Stephanie was thankful to be surrounded by family, friends and a community that supported her journey.

Her corporate career started during her senior in high school when she was selected to participate in a program called Inroads, a non-profit group established in 1970 by Frank C. Carr to address the lack of diversity in corporate America. “I interviewed with Liz Alicea-Velez, the leader for the Latin American region at Western Union and she saw my potential. I am forever grateful that our paths crossed as Liz ended up being a sponsor later on in my career,” she says. Stephanie worked for Western Union all through college, attending Barry University, one of the largest Catholic Universities in the Southeast. While attending Barry University , she studied Marketing and joined both Alpha Phi Sorority and a business fraternity, Delta Sigma Pi serving as President of the business fraternity during her senior year. Her leadership journey had already began.

After graduation, Stephanie accepted an Assistant Marketing Manager role at Western Union, working for the Events Marketing team. “My mandate was to lead the events and grassroots marketing strategy and implementation for the Caribbean region and facilitate growth by penetrating key demographic areas. I managed 3 marketing agencies and 3 Community Consultants based in the US and Canada.”

After two years, Stephanie was promoted to the Product Marketing team to help grow existing products. “I was challenged to deeply analyze the data and perform market analysis to derive the correct pricing for the Caribbean market, all while ensuring that our targeted marketing strategies were meaningful to this community and population” she says.

While she continued to see positive movement in her career development, she was approached with a challenging opportunity. “Western Union had just bought a money transfer company called Vigo,” she says, “and the company President for Latin America tapped me to grow the brand in the Caribbean.” She hired two sales people – one in Miami and one in New York City. Under Stephanie’s leadership, Vigo experienced double digit growth in Haiti, Jamaica and Barbados.

Her success with Vigo led Stephanie to be named Country Manager in the Caribbean for both brands, Vigo and Western Union. “It was challenging because I was managing two competing products,” she says. “In the end we began to de-emphasis Vigo because it was cannibalizing the Western Union brand and beginning to impact strategic relationships. We eventually sunset Vigo and transitioned the business back to Western Union.”

Shortly after this, the Payment Services Directive (PSD) was enacted. This new regulation enabled Stephanie’s team to expand their retail presence within the five French overseas departments : Martinique, Guadeloupe, St. Barts, St. Martin and French Guiana. “The due diligence and onboarding process was quite a challenge, but we were successful in the long-run. Also, it allowed me to put my French to good use.”

In 2013 Stephanie married the love of her life and moved to Atlanta from Fort Lauderdale but continued to work for Western Union. Eventually Stephanie made the decision to move on. I had spent over a decade at Western Union and I was ready to see what else was possible for me in the Fintech space” she says. Stephanie took a year sabbatical as COO of the Foster Household. She cared for her husband and their two small children, while completing several product certifications, volunteering in her community and growing her network.

In 2018, Stephanie accepted a Product Manager role at Fiserv. “It was very different from Western Union,” she says, “because the organization was very complex and 2X the number of employees. I enjoyed the challenge of defining the Go to Market strategy for a commercial banking solution. In 18 months, we built a sales pipeline of close to $60 million in annual recurring revenue.”

Stephanie’s unique international experience in payments and product management caught the eye of Finastra and she was offered a position with the company in 2020. Finastra is the third largest fintech in the world with a growing presence in Atlanta. The company has 10,000 people in 130 countries serving 9,000 global clients in retail banking, payments, lending, corporate banking, treasure and capital markets.

Finastra believes what makes them different are three things that they are quite proud of: an Open Platform, an Open Culture and Open Finance. Open Platform means an open architecture model to power innovation in financial services. Open Culture highlights their long lasting partnerships with strategic technology providers, system integrators and consultants. Open Finance means that they are champions for greater financial transparency and inclusion.

“The Open Platform, via our FusionFabric.cloud, enables co-creation and co-innovation between fintechs and financial institutions,” says Stephanie. “We believe that an open financial universe is good for everyone.”

Because of her resolve to empower other women in fintech, Stephanie is highly involved in two organizations, the Atlanta Innovation Forum and Wnet. At the Atlanta Innovation Forum, she helped found a special interest group called Women Driving Innovation and will serve as Co-Chair of this group in 2021. At Wnet – the Women’s Network in Electronic Transactions, an international group with members in the US, Canada and Europe – Stephanie serves on the Advisory Board. She was named as one of the Electronic Transaction Association’s 40 under 40 for 2019 and was one of thirty women selected out of 500 global applicants for the Money 20/20 Rise Up Leadership Accelerator program in 2018 and was a Money 20/20 speaker in 2019.

Stephanie realizes that she cannot “have it all” as a full-time working wife and mother of two but she has learned to balance priorities between work, home, and her volunteerism. “ I want to set a positive example for my daughter and my son” she says. Stephanie jokes that she has not slept in the last seven years and how much she cherishes time with her little ones.

Stephanie believes that she owes her career success to her Mom for instilling a firm work ethic and for insisting that she try new things and take risks. She is also grateful to her always supportive husband Mark, her biggest fan.

The Home Depot Foundation Surpasses $400 Million in Support of Veterans

RWDC Industries raises US$95.1 million in series B2 funding