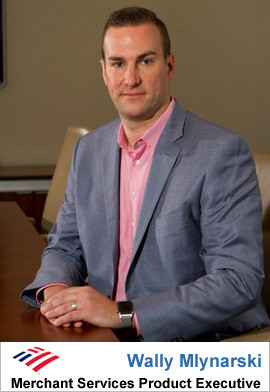 Payment Innovation from Within

Leading innovation in successful companies can be extremely difficult for a variety of reasons. Market leaders, established over decades, sometimes find it difficult to divert attention from profitable, established products to new offerings. It takes a special person to maintain a start-up mentality while staying fully connected to the goals and aspirations of the larger enterprise.

Wally Mlynarski, Merchant Services Product Executive at Bank of America, has had great success innovating payments over the last 10 years in more than one successful Atlanta company. “You begin as you intend to proceed,” he says. “It’s important to bring your team closer to the business problem. You have to establish support from the CEO and across all departments of the company. Then you can really make things happen.”

Wally was born in Hartford, Connecticut, where he lived until he was four years old. His father’s work required him to move many times during his childhood and teenage years. “My father was first generation Polish whose family moved to the US in the early 1950’s,” he says. “He went to the University of Illinois – Chicago and later got an MBA from the University of Connecticut, followed by a great career with Phillips and then Siemens. I guess you could say that my Dad was the American immigrant success story, and we were all very proud of him, but his career did require a lot of moving around.”

Growing up, Wally played a lot of sports. Wrestling for 12 years, baseball and football in high school and he also picked up rugby, which he continued to play. “I was in the Atlanta Rugby Club from after graduating from Georgia Tech until about the age of 28,” he says. “It helped me connect with people in town.”

Good at math and science in high school, a college like Georgia Tech seemed like a great idea to Wally. “I wanted to be at a college with a connection to a major city, and Atlanta gave me the opportunity.” He pledged Pi Kappa Alpha, and made numerous friends who have been successful entrepreneurs around Atlanta. “I’ve been able to develop a great network of friends and associates,” he says.

Wally did very well as a Computer Engineering major at Georgia Tech and is rightly proud of the fact that he mostly worked his way through. “I co-oped with a Georgia Tech Advanced Technology Development Center company called Synchrologic, doing quality assurance for five semesters, one on and one off,” he says. He also worked as a waiter at Steak & Ale and Jocks &Jills. He sometimes delivered medicine to the elderly. Despite all the hard work, Wally was able to do one semester of study abroad, spending time in Japan, Australia and New Zealand. “It was a great experience. I was able to make a lot of new friends and also took time for some fun activities, like hang gliding and bungee jumping.”

After graduation, Wally started as a full time employee of the company he had co-oped with. Synchrologic had been bought by IntelliSync and his first work there was product and developer support. In 2006. Intellisync way bought by Nokia and Wally began working in professional services. “I was fortunate to get a mentor at this time, a gentleman named Nabil Fanaian, who is now the CEO of Dark POS, a local Atlanta point-of-sale company,” he says. “Under Nabil, I got great experience in programming, project management and delivery. It was an education.”

By 2010, Nokia was in a downturn and Wally was asked to join SK C&C, South Korea’s third largest conglomerate, to work in a division that became CorFire. “I wanted to make use of my telecom experience,” says Wally, “they were already working on the Google Wallet for First Data. This is what put me into payment innovation.” To get the job, Wally had to build an Android application as part of the interview process. “I didn’t have any experience with Android at the time, so I first had to teach myself. I was happy that it worked,” he says.

A lot of mobile payments functionally was developed by CorFire at this time and there were several milestones. As one example, Wally was able to lead the technical sales of mobile payments to Dunkin Donuts and then ensure the delivery of the ability to pay by phone at the point-of-sale – a very huge deal at the time. Another was developing a mobile wallet for Vodafone, starting with Germany.

In 2012, a friend of Wally’s who was working in strategy at Elavon, helped him set up a meeting with the company’s then Chief Product Officer, Marianne Johnson. “I was pitching Marianne on the idea of Elavon developing a ‘city wallet,’ with CorFire that could be used by any number of small businesses in a geographic area. We got along quite well.” While waiting to hear back from Marianne on his idea, Wally’s friend in strategy called him to say that Elavon had an opening for an executive leader to run Elavon’s new mobile center of excellence. “I applied and got the job,” he says.

Wally started at Elavon in April of 2012. By June, Wally and his team had a five pillar strategy for key innovative products to invest in, based on the company’s global footprint. While his proposal was locked in discussion and review for two months, Wally set to work on a partnership with NCR. Then, in August of 2012, Square announced its partnership with Starbucks. “The CFO of US Bank immediately called the CEO and CFO of Elavon to ask, first, what had just happened and second, what was our mobile strategy,” says Wally. “We were able to secure substantial investment to move forward.”

Wally brought in Agile development and was able to hire 35 people whom he had worked with at Nokia within the next 30 days. “We needed to collapse barriers to collaborative working and bring the developers closer to the business problems,” he said, and this allowed for appropriate designs and longer term planning to drive customer benefit.”

He wanted to brand the new innovation group that he was developing and started asking for ideas for a name. While having a drink with a senior marketing leader at U.S. Bank, looked at the lime in Wally’s glass and said “how about calling it the Grove?”

“While we had a name that everyone liked, but we were literally starting from scratch,” Wally says. “First, we had to buy all the mobile devices that we wanted our applications to run on so that we could test them.” By March of 2013, 85 people were working in the Grove. “We began to harvest innovation in and around payments to help customers grow their businesses,” he says.

Their first breakthrough was a digital merchant boarding application that was first launched in Europe for Avon. This became the digital application for underwriting for Elavon. Wally and his group worked with point of sale provider Talech to bring them from dumb terminals to smart terminals and point-of-sale. Also, Wally was given more responsibility when the Elavon employees working on the NCR Silver partnership were folded under his group.

In 2017 Wally was named Chief Product Officer of Elavon and by the end of 2017 he had worked with the leadership team to secure an investment for additional innovation over the next five years in eCommerce and integrated payments. He had over 400 people working for him in both the Grove and the product group globally, including product, product marketing, engineering, and related functions. “I was proud of what we were able to accomplish and we couldn’t have done it without the full backing of the company,” he says, “and that’s the way it has to be. All facets of a company should drive innovation. It has to become a way of doing business, including finance, marketing, go to market and more, not just development. The support of our CEO, Jamie Walker, was critical in securing support across the company.”

As Wally’s group was working at Elavon, they also got involved in the acquisition of some new companies. First was the purchase of US Bankcard Services, a US Bank independent sales organization. Next was Electronic Transaction Systems, a company that had developed a host of products and customizable solutions, which streamlined operations in specific verticals, eliminated multiple vendors and enhanced security. Lastly was the acquisition on CenPOS, a company that made it easy to offer customers the convenience of making payments anywhere, anyhow, anytime they wanted to. Wally ran the integration of this company when it was brought into Elavon. “They had some great new technology,” Wally says, “and my first goal when they came into Elavon was to get them acclimated to their new environment without stifling their creativity.” He wanted to make sure that the two cultures blended together and took great care to get to know the new people to develop trust and the sharing of ideas.

In 2019, Wally joined Bank of America in their Merchant Services group. “I left one ‘intraprenurship’ to join another,” he says. Bank of America was ending its 10 year joint venture with First Data (now Fiserv) and Wally would be working with the bank to establish their new merchant services business strategy.

“We’re focused on making the transition smooth for our customers,” says Wally, “meeting and resolving all of their concerns during this period.” His task is also to drive the product strategy of merchant services in conjunction with the wider Bank of America financial services offering, while driving innovation.

For the past three years, Wally has been speaking at Professor KarthikRamachamdran’s class on disruptive innovation at Georgia Tech. “While I was flattered to be a speaker in Professor Ramachandran’s class, I also saw it as an opportunity to recruit new talent into Atlanta payment processors,” he says. “I told them about all the changes that were taking place in payments and fintech and that they didn’t have to go to Silicon Valley to get an exciting, important job.”

On the civic side, Wally has been involved with the American Transaction Processors Coalition (ATPC), the Metro Atlanta Chamber, the Mobility Taskforce and the Fintech Taskforce. He has been a supporter and volunteer for the City of Refuge for 6 years, an organization that assists battered women and victims of human trafficing in the metro area. Wally also served as President of the Atlanta Old While Rugby Club in 2007.

Wally has been married to his wife, Jessica, for 11 years. They have two daughters; Mackenzie, age seven and Harper, age four.