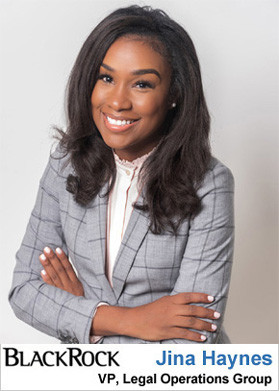 When BlackRock opened its innovation center in Atlanta, Jina Haynes knew that she had to be part of it. “Atlanta is the intersection of finance and technology,” she says, “so to work in fintech with BlackRock, the world’s largest asset manager, was an opportunity too good to miss.” Jina became the Vice President, Legal Operations Group, for BlackRock in November of 2019. While her skills made her an excellent choice for the vital role, Jina was also well suited to help the company with its firm commitment to diversity, equity and inclusion. Although a relatively new Atlanta resident, Jina has quickly become recognized as a young business and community leader.

Born in Renton, Washington to an engineer father who worked at Boeing, she later moved to St. Louis, Missouri when her father’s work took him to McDonnell Douglas. From eighth grade through high school, Jina live in Dallas, Texas where she ran track and played on the basketball team. “I had planned to play basketball in college but blew out my knee during my senior year of high school,” says Jina, “and it took me six months to learn to walk again.”

Her college career options were given careful thought. “My family has attended Historically Black Colleges and Universities for generations,” says Jina, “and I knew that I wanted to do the same.” Invited to attend the homecoming football game at Florida A&M University during her senior year of high school, her experience was so positive that she decided FAMU would be her choice among HBCUs. Receiving a full academic scholarship, she decided to major in business finance.

“Although I knew that I wanted to be a trial lawyer, I decided to major in business because FAMU had such a great program,” she says. The tough business school had a full immersion program that required total commitment. “They wanted us to be ready for the outside world, requiring us to wear business dress for every class, take mock interviews that were almost like debates and attend forums with CEOs from around the country,” she said. “We were being watched and evaluated all the time. It was intense.”

When it came time to apply for law school, Jina liked the idea of Michigan State University because the school of law had produced black graduates even before 1900. “It meant a lot to me that they had a history of diversity,” she says. Committed to becoming a litigator, Jina entered moot court competitions in her first semester and finished second in the entire school. During the summers, she interned at the District Attorney’s office in Houston, Texas where she tried cases and interviewed witnesses.

“I really enjoyed law school. The entire experience was very positive for me,” she says. “I spent one semester in Washington, DC, working for the Attorney General’s office while still attending classes. I got to hear a case before the Supreme Court. It’s my dream to argue a case before the Supreme Court one day.” Another fun though time consuming thing Jina did was serve as Vice Chairman of the National Black Law Students Association for the Midwest. “I planned and ran a three-day conference in Chicago that was very well attended,” she says, “it was exhausting, but well worth the effort.”

After law school, Jina happened to meet the District Attorney of Philadelphia, at a law conference and told him that she was looking for a job as a prosecutor. After briefly explaining who she was and what she could do she said, “I think we need to talk further.” He said that he agreed. Later that same day, someone from the DA’s office called her to schedule her “second” interview. It would be an eight-panel interview in Philadelphia.

“I walked into the conference room and offered to shake each person’s hand,” she says, “and not one of them would shake hands with me. I thought it was strange but sat down and did the interview. When it was over, I went up to each person to shake hands again. My thought was that I wasn’t going to change who I am for the sake of a job. For the second time, each person rejected a handshake. I thanked them and left.”

A short while later, Jina received a call telling her that she had gotten the job. “It turned out that the no handshake was a tactic to see if the person being interview could be rattled. Luckily, I passed with flying colors,” she says.

Despite the offer from Philadelphia, Jina decided to accept a job with the District of Columbia as an Employment and Compliance Attorney while studying for the Pennsylvania bar. After passing the bar, she went to Philadelphia as a prosecutor.

“It was tough, but the best work experience of my life,” she says. “I had 150 cases on my first day and didn’t even know how to find the courthouse.” Learning quickly how to do multiple things tasks at once, she soon came to appreciate how much citizens valued her prosecutions. “People like to see accountability. Even with unsuccessful prosecutions, people – the victims of crime – feel that they have been heard. I was tough but fair and did feel a little bit like a superhero for justice,” she says.

Nevertheless, some of the work could be grim. After a little more than two years in the DA’s office Jina lost a child rape case which caused her to reconsider if she wanted to be a prosecutor for life. After much consideration, she decided to move to the private sector.

In 2014, Jina was recruited to a position in Houston to work as a Senior Attorney for alliantgroup, doing tax litigation defense. While interesting, she felt the pace was a bit slow. When contacted by a recruiter about a position in Atlanta, Jina was excited to hear more.

“I have always loved Atlanta,” she says, “because it’s always struck me as the perfect example of the south meets the northeast.” Mobilitie, a telecom infrastructure company, hired Jina in April of 2016 and she moved to the Peach state. The company was trying to set up wireless towers all over the US to increase coverage. “I handled legal affairs for Georgia and ended up spending a lot of time working with the lawyers in the City of Atlanta government.” One year later, Jina was recruited into the law department of the City of Atlanta.

“My role was big,” she says. “I became Lead Counsel for Security and Information Technology for Hartsfield-Jackson Atlanta International Airport and the work was endless. As you can imagine, the airport is constantly upgrading security and IT systems. Legal was involved in everything.” The large number of stakeholders was also an interesting challenge. “Dealing with federal, state and local municipalities and then down to the level of an individual vendor running a shop at the airport was time consuming, but vital,” she says, “and there were no shortcuts for the world’s busiest airport.”

Jina handled cyber security also, but it was physical security that yielded her most interesting story from her tenure with the airport. “We started to have a problem with fence jumpers,” she says, “some of whom even made it up to planes that were about to take off. In the end, there was nothing for us to do but put up a concertina or razor wire fence all around the perimeter to discourage fence jumpers.”

While living and working in Atlanta Jina quickly connected with the community via the Junior League of Altanta, and other volunteer organizations and became very aware of all that Atlanta had to offer. When she heard that asset manager BlackRock was coming to town to set up its innovation center, she felt that she had to be a part of it.

“I knew that Atlanta was the intersection of finance and technology. I had really enjoyed all the technology work that I had done for the airport and thought my experience might be a fit for BlackRock,” she says. Jina had always been recruited into jobs but had to make the first move. “I went to the BlackRock website and applied, submitting my resume,” she says. “They called me two weeks later.”

After a phone screen, Jina was brought in for an in-person interview and was soon hired. On a day to day basis, Jina manages the legal team responsible for drafting, negotiating and executing legal and investment agreements including Investment Managements Agreements and Investment Guidelines on behalf of BlackRock's Institutional Client Business for Canada, Latin America and Transition Management business sectors. The team works closely with client & investment businesses, critical support teams and external service providers to facilitate the onboarding of new client relationships and provide ongoing support for existing clients. She also participates in ongoing related project initiatives to enhance the client experience and mitigate operational risk to the firm.

Her work doesn’t stop there, however. She is the lead for the BlackRock employee resource group, the Black Professionals Network in Atlanta and is also a representative on the network’s Operations Committee. “I’m the voice for black professionals in a company that genuinely wants a more diverse and inclusive workplace, which is exciting,” she says. “BlackRock is committed to putting stock in all employees and make sure that everyone feels included.” Recent news reports state that the company will be pushing for gender and ethnic diversity on the board and workforces of companies in which they invest in 2021.

Informally, BlackRock is also discussing these issues with a variety of organizations and the larger Atlanta community as a whole. “When I came on board, they made it clear that they wanted me to also be a community engagement advocate,” she says. This fit well with her active membership in the Junior League of Atlanta and Jina was also selected to participate in the LEAD Atlanta class of 2021. The intensive eight-month leadership development and community education program is targeted at young professionals and prepares them for future leadership roles. “I hope I have embraced leadership for change in the same way that my company has embraced leadership for diversity, equity and inclusion,” she says.

“I’m proud to be in Atlanta and help to carry on the Atlanta tradition of positive change,” she says, “and I’m especially proud to be working at BlackRock, which is firmly committed to helping people from all backgrounds experience financial well-being.”

Invesco Ltd. nominates Paula Tolliver for election to its Board of Directors