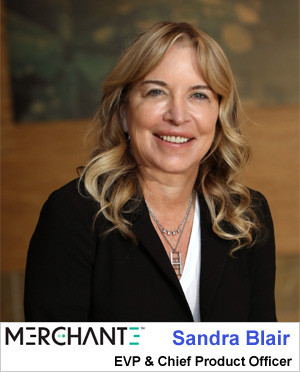 Many people have worked both as a consultant and a company operator, but few have been as successful at doing both as Sandra Blair. Blair, a Senior Director at restructuring firm Alvarez &Marsal, is currently working full time for client MerchantE, a full-service payment processor based in Atlanta. The transformational change instituted by Sandra and her team has reshaped the company and brought increased profits and growth.

Sandra Blair was born and grew up in Philadelphia, Pennsylvania, attending local schools and college within the state. She first became acquainted with financial technology while working part-time for BHC Brokerage while in high school. At the age of 15, she wrote diagnostic software with her doctor father and started a small business that sold ten years later to Elsevier. For college, she attended Penn State, where she was a member of the women’s swim team.

When an injury prevented her from competitively swimming, Sandra left Penn State and returned to Philadelphia. Sandra worked full-time at BHC during the day and attended Villanova college at night, earning her BS in Finance and Commerce. During her 5 year tenure at BHC, she also became a developer and wrote the first stock dividend reinvestment program for the company.

Sandra next worked for total benefits outsourcer CitiStreet and then became SVP of Product Development and Delivery for Vital Processing Services, now TSYS, leading a team of 200 people.

In 2003, Sandra took time off when she had her son. In 2008, Sandra joined Align Financial Services Consultants as an SVP, consulting with banks on how to go to market and improve operations. In 2011, she was recruited by Alvarez &Marsal to run their payments and banking practice working with large financial institutions.

In 2014, Sandra started her own consulting company, ellisBlair, and soon began working with payment processor Vanco. After consulting for a year, Sandra joined the company as a permanent employee, later becoming CIO/CTO and COO. “At that time, I was running most of the company, except for sales and finance,” she says. As an executive leader for the processor, which served faith-based and nonprofit organizations, Sandra learned a lot.

“The biggest thing I learned is that even a smaller company can have communication problems,” she said. “Communication must be frequent and transparent. You have to be brave enough to tell bad news early and expose flaws internally.”

While at Vanco, Sandra remediated all technology, rolled out new products and built “an amazing team of high performing experts,” she says.

Later, Sandra became a consultant for FIS then joined them full time to run product strategy for all financial institution lines of business.

In 2019, Alvarez &Marsal asked her to rejoin the firm and serve as interim head of products for MerchantE, as part of the transformation team.

“We’ve done a lot at MerchantE,” she says, “halting many projects and focusing on fewer, higher impact initiatives. We rolled out 10 new products that are quite successful. In short order, we greatly increased profits.”

This was the consulting side of her work. “You have to connect with people and put them at ease, but you also have to quickly make some hard, data driven decisions,” she says. “It’s all about being very practical about what can be accomplished in the short term. Longer term, you have to lead the client to implement changes that result in better performance.”

Sandra believes that setting clear expectations is the most important skill that a leader can possess. “My key product development & management expectations are: on time, on budget, right the first time, right every time. These may seem lofty goals, but goals should be a stretch, to drive people to excel,” she says.

As an operator, Sandra has found that the key to building strong teams is to push people to the fullest extent of their capabilities by insisting that they be all that they can be. “Sometimes this means having more faith in them then they have in themselves,” she says, “but in the beginning, this is critical.” Soon, people find that the stretch goals were not out of reach after all. Once the pleasure of success kicks in, people will often find another gear to move faster toward higher achievement.

“At this point, team members will be up for anything, so it’s important to prioritize,” she says. “We want to channel the newfound energy and enthusiasm to specific goals because, of course, you can’t do everything.” Decisions have to be made quickly regarding people and priorities and transparent communication is key. “It should be clear to everyone what the focus is.”

The final part is execution, which Sandra regards as the most important. “This is what the combined consultant/operator can do that others can’t – execute,” she says. “I always do what I say I’m going to do and I expect the people I work with to always do what they say they are going to do. If we hold each other accountable, we will be successful – no question.”

Soon, both revenues and profits are increasing and the team takes a well-earned round of applause. It feels great. So, do they rest now? “No, you don’t rest,” she says. “But it feels like rest to the team. If you’ve done things right, they are now much more confident about what they are doing and suffering from much less stress and strain. Work is easier when you’re successful. The good news is that everyone will want to move forward.”

While you don’t rest, Sandra says that it is important to take a moment to absorb what you’ve achieved and instill more positive thinking. “At MerchantE, for example, I asked the team to reflect on what was great about working at MerchantE,” she says, “and one of the unique advantages about working at MerchantE is the fact that it’s one of the few full-service payment processors out there. So every employee has the opportunity to learn everything there is to know about the payment processing business. You don’t get that opportunity at larger companies. They are too siloed.”

Sandra has been in the payments business long enough to know that major changes are in the works. “Soon, businesses and consumers will have choice based on data and circumstance. By analyzing payment transaction trends and financials, we should be proactively suggesting payment solutions to our clients.”

It’s a multi-faceted problem to solve, she says, “But we have the data to give suggestions in real time, rather than having clients make blind decisions. For example, if we know the cash flow of a company and year over year trend analysis for volume and seasonality, we should be suggesting loans and investments.”

An emphasis on diversity and inclusion will be an important tool for achieving this new world, Sandra believes, because it will lead to a more realistic perspective on the customers being served. “We need to spend more time understanding the needs of individuals and small business customers,” she says, “and a focus on diversity and inclusion can definitely help with that.”

A Career in Fintech

5 Mistakes to Avoid When Buying a Car this Tax Season