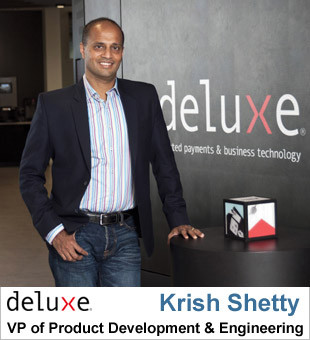 At the Grand Opening of the Deluxe Technology Center in Atlanta on October 19, an executive taking a tour of the new facility asked Krish Shetty why the transformation of the company was going so well. "We have a clear vision of what we want to do," said Shetty, Vice President of Product Development & Engineering at Deluxe, "and we're passionate about our people, culture and products."

Indeed, the largest supplier of checks and check related products in the US is making vast changes, with more to come. "The main reason that I was thrilled to join Deluxe a little over a year ago was the excitement I heard for transformation in the voices of the leadership team," he says. "We know it will be hard, like anything worthwhile is hard, but we also know that we can do it. I feel that my entire career up to this point has led me to this place. My teams and I play a huge role in fulfilling our CEO, Barry McCarthy's, vision of changing Deluxe from a company of companies into a Payments & Data product and platform company."

Born and raised in Mumbai, India, Shetty received his Bachelor of Engineering degree from Mumbai University and was quickly recruited to work for International Computers (India), Ltd., a subsidiary of Fujitsu. "They told me that I would be traveling for work, and I knew that I would love to travel," he says. He spent a year working at the Japanese Product Development center in Pune and was then transferred to Reading, England, a town just west of London.

"This was 1999 to 2000 and we were building computer systems for local taxation, city and county," he says. "I was encountering financial systems for the first time and I learned a lot. With five different teams working together, I soon came to appreciate how well successful collaboration could work. I also learned that you must focus on fixing the problem that the end user wants solved. Even today, I approach most of my work from a problem-solving perspective."

He learned that the people element of his work was the most important element of all. "Technical competence - or even brilliance - is useless if you lose the people," he says. "Whether it's the client, or your own team, there has to be good communication to both set expectations and meet goals. Frank communication should also allow you to say no. If you try to do everything you end up doing nothing of value."

In 2000, Shetty was offered a position with a startup in Atlanta called Ockham. Working first as a consultant, he was offered a permanent position after three months. Joining a team of 10, the company was developing and refining sales pipeline technology and have a great deal of success. "We had revenue. Intel and some other large companies were customers and we had some great business intelligence software," he says.

Although he had initially planned to stay in Atlanta for 12 months, Shetty found the city growing on him. "I made a large number of friends and business colleagues. Atlanta began to feel like home," he says.

After the dot.com bust, Ockham was sold to a company in Boston and Shetty was told that a position was waiting for him there. "I was thinking about going when some friends of mine suggested that I at least investigate the possibility of staying in Atlanta and working for another company here," he says.

"The COO of Ockham took an Executive Leadership role at another startup called Alogent Systems and asked me to join. We did Check 21 work and remote deposit capture, so now I was fully in the financial services space," he says, "but it would be a few more years before it began to be called fintech."

One of his longest projects while at Alogent was for BankOne in Columbus, Ohio. "It took so long that I frequently had to step back and look at what we were doing to make sure everything worked," he says. "It usually did. I began to find value in looking at why what we were doing that worked. These processes could be duplicated in the future."

In nine years at Alogent, Shetty became an expert in Agile development. "I still believe that building software in an agile, iterative manner, is one of the best ways to build software," he says. "By constantly obtaining feedback from end users, you can mitigate the risk that things are going wrong. We were working with some of the world's largest banks, so everything had to be scalable and resilient."

During his time at Alogent, Krish decided to pursue his Masters in Business Administration (MBA) from Goizueta (Emory) Business School. “Being an engineer and technologist by craft, I was always curious about how companies and assets get valued from a finance perspective. The Dot com era was still fresh in my mind where startups had out of this world valuations in 1998-200, until they suddenly dropped to earth with a thud.”

Krish graduated from Goizueta in 2008 with a major in Finance and focus on strategy. “It felt like a great opportunity to use my newly acquired Financial plus strategic chops and pivot down a different career path”. Unfortunately for Krish the Financial sub-prime crisis hit the global markets late 2007, early 2008. “I was about to make a switch and all hell broke loose with the sub-prime crisis. It seemed like my desire to learn Financial markets and combine it with technology expertise would remain a yearning.”

Fortunately for Krish, since he entered the MBA program he had been in constant touch with one of his mentors, who did acquisition related due diligence for large private equity firms like Riverside Partners, Golden Gate Capital to name a few. “My mentor was a founder/partner for a highly reputable consulting firm that performed operational, financial and technology due diligence for acquisitions and equity carve outs. When I mentioned about my desire to put my financial and strategic learnings into action, she welcomed me to be a part of her due diligence team on a part-time basis. I would bring in technology and operational expertise to the team, while I learnt and experienced the financial and strategic aspects of the deal process”.

Over the next 2-3 years Krish worked on several deals as a part of the due diligence. “I learnt a lot about private equity portfolios, small/medium businesses, valuations, startups, healthcare & insurance verticals during those years. I would forever be grateful to my mentor for this experience,” he says.

So what made him get back in Product Development? “As much as I enjoyed the due diligence and being a part of the deal team, it also made me realize that my true passion still lay in being a technologist. I was passionate about building products and platforms that solves customer problems. The due diligence process had provided me a whole different perspective, that I was not privy to until now,” he says.

Fiserv asked Shetty to join them in 2011 where his responsibility grew to the point where he had eight people reporting to him and 200 people in all working for him. "Fiserv wanted me to help build more agility into their software and platforms," he said, "this was a change for the this company. I found that adhering to certain principals allowed us to have greater success than we would otherwise have had."

"First is prioritizing," he says. "I would gather my team, together with business leaders, and we would all decide what were the six most important things to concentrate on for the new agile platform that we were going to build.

"Second, was risk. Risk management is foundational for any innovation. You want creative ideas but if they aren't going to work, you need to know quickly. So I established a culture where it was ok to fail, as long as we failed fast." I found my own people to be so risk averse that I had to encourage risk taking. Otherwise, substantial change would not occur. Instead there would be small, incremental change. Not what we needed."

"Third, was growing internal talent. I wanted my people to see that I valued them and that they had a future, so I worked on developing both their technical talent and leadership skills. This was a way of showing them - rather than just telling them - that they could be confident of themselves and their skills."
This all worked extremely well for Shetty and Fiserv. "We put in place people, systems and processes that would serve as a foundation and we build one of the first cloud based platforms for the company," he says.

In 2020, Shetty was recruited to join Deluxe to become the Vice President of Product Development. "Through the interview process I learned that Deluxe already did a lot more than checks," he said. "The passion I heard from every person I interviewed with for transformation was electric. I could tell that they were committed to change and my last year with the company has certainly bore that out."

Some aspects of the company's legacy were quite positive and would be of great use in the transition, Shetty felt. "Deluxe had spent 100 years developing deep, positive relationships with nearly every bank in the country. It's reputation of never letting the bank down provides a great platform of trust for selling new products," he says.

For all the positives, change is still a hard thing to do and Shetty was very happy with the way that senior leadership at Deluxe approached the effort. "First, they care about the people - all of the people. We are all Deluxers and now, thanks to Barry, we are all owners of the company. The culture is great," he says. "Second, all senior leadership work well together, trust each other, and are working to accomplish the same goal. There's no tension filtering down to employees from upper management."

As the Vice President of Product Development, Shetty bears a lot of the responsibility for changing Deluxe into a company of products. "When I joined, there was already some great talent to work within but I also formed some teams with new roles," he says.

Teams must be fungible, Shetty believes, able to work on multiple problems. "It's about outcomes. You build the product to solve the problem, but that's not enough. It has to be scalable and reusable," he says. This is better for the team. "The ability to do this makes you infinitely employable as well as desirable for eventual leadership."

Today, Shetty is confident that he and his teams know what the problems are and how to address them. "How do you build, how do you release and how do you automate software? These are the ongoing questions that we are working on and getting better at every day," he says.

"The last 12 months have been a rollercoaster but my teams have been hitting all milestones and we are getting platforms in place," he says. "When we get the right people, systems and processes in place - something that I am constantly working on - we will have accomplished a major goal for Deluxe. Then my role as a leader will change."