The Power of Transformational Leadership 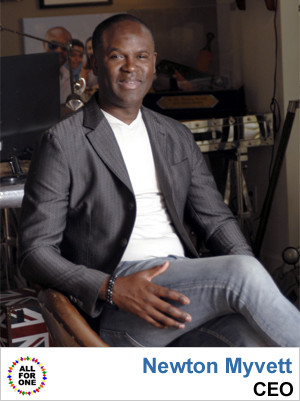 The benefits of servant leadership have become very clear to organizations in recent years. The servant leader shares power, puts the needs of the team first and helps them develop and perform as highly as possible. Instead of the team working to serve the leader, the leader exists to serve the team. Newton Myvett, CEO of the All for One Foundation, swears by this approach. "I've built a number of high performing teams by taking this approach," he says, "and I have to tell you, the boost to employee morale alone is worth it. I call it transformational leadership."

Newton Myvett was born and raised in Belize Central America and came to the US at 19 years of age. "My uncle was the president for a small technical school in New York City and he offered me a job," he says. "I told all my friends that I was headed to New York to become a big executive. When I arrived, my uncle placed a bunch of flyers in my hands and placed me on a street corner. It turned out that my job was to hand them out to passersby who might become students."

Undeterred, Newton adopted a positive approach. "My attitude was that this was a chance for me to find people, on a one-on-one basis, who needed help to improve their lives," he said. He did such a good job of finding people who could be admitted to the school and successfully perform that after eight months he became an admissions counselor and was number one in student retention.

By age 25, Newton had moved to Devry University, running its largest campus in New York City, working there for five years. He increased enrollment there from 700 to 2800 students. In 2002, he was promoted to Dean of Enrollment for all Devry campuses in Florida and moved to Westin, Florida.

"My journey, experience and stories inspired me as a leader," Newton says. "I worked with non-traditional students, people who didn't fit into the traditional college environment. Education is not just a game changer - it's a life changer."

As in New York, Newton implemented a college prep program called College Bound for the academically challenged. "It worked the same as in New York," he says. "Students who successfully completed the College Bound program went on to graduate at a very high rate." He also opened a new Devry campus in Miramar, Florida which immediately grew to 900 students.

At the end of 2002, Newton was asked to interview for the position of Regional Vice President of 12 of the Art Institutes campuses. He asked the CEO, "which campus keep you up late at nights?" Told that it was the Pittsburg campus, he told the CEO that he would rather become VP of Admissions for the Pittsburg campus. "I spent the first two weeks meeting every single member of staff," he says, "and put every person working on my team in a professional development plan. The interesting thing was, some folks were quite happy with their jobs and wanted more personal development and a positive culture than career development. It was fine with me."

Newton again put in place the same College Bound program that he had instituted in New York and Florida. After three years, the Pittsburgh campus grew from 1,200 students to 3,500 students.

"My focus always has been and always will be on my people," he says. "By building trust, your team can become transformational. The team feel empowered and appreciated, they engage with each other and with other people at a higher level and will start to perform at exceptional levels. The key is for me and my team to have authentic relationships with each other."

In every leadership role that he has held, Newton says that he has always placed chairs just outside of his office as a tool to let people know that they were always welcome to come and speak with him. "As a leader, I am not defined by my title, so I welcome everyone to stop by and share their stories and tell me their concerns. Sometimes, problems can be solved in just a few minutes," he says.

In 2005, Newton was made the VP of Admissions for the Art Institute of Atlanta. His CEO wanted a turnaround like Pittsburgh.

"I found people who were unmotivated," he says. "By employing the same leadership methods that I had employed earlier - putting people first - we were able to turn things around and gave every employee a plan for success."

On a visit to Atlanta, the CEO of the Art Institutes told Newton that he appreciated all the work that he had done and told him that he wanted him to become the president of an Art Institute campus, specifically in Phoenix, Arizona, and for the same reason. Within six months, he put the College Bound program in place and shifted the culture and grew enrollment by 10%. "The most gratifying part of my tenure in Phoenix was the relationship that I developed with the faculty, students and staff," says Newton. "Several of them told me that in all the years that they had been teaching for the Art Institute, that they had never met the college president."

Newton became the President of the new Art Institute of Austin, a branch of the Art Institute of Houston, in 2009. A start-up, starting from scratch, Newton grew the college to an enrollment of 1,500 students within a year, implemented a new culinary program and started a partnership with SXSW and other major organizations in the community. Later in 2009, Newton was asked to become VP of recruitment and marketing for all 52 Art Institute campuses. He did this job from Atlanta and held the position for over two years. He is most proud of the work he did to impact the lives of thousands of students across the country and a leadership development program he developed that was implemented throughout the system of schools.

In 2013 he became Regional President of the Art Institute of Atlanta and its six branch campuses. Managing a budget of $80 million per year and providing leadership to five hundred faculty and a staff of 1,200, Newton set out immediately to build relationships with community leaders as well as finding new ways to engage the underserved. Enrollment increased 13% over a two-year period but the accomplishment that Newton was most proud of was the inauguration of the Harvard University Debate Club for Minorities in Atlanta, the opportunities he provided to his staff and the bridge he and his team built with the community for students.

"I have always been an advocate for diversity, inclusion and empowerment," he says, "so when the Harvard Debate Council asked me to become a founding partner and sponsor in setting up the debate club for minorities, I knew that the Art Institute of Atlanta needed to be all in." Giving them space on the Atlanta campus as well as a $10,500 grant, he set to work with the council immediately. "We worked with high school students from throughout the different counties," he says. 85 students were selected to participate in the inaugural year. "It was important for me as we went through the selection of students that we made it as diverse as possible which we did," he says. The completion of training for the students turned out to be emotional. "The look on the students faces when we handed out their Harvard sweatshirts was one of the most rewarding experiences of my life," he says.

Four months later, in their first competition, the Harvard Debate Council Diversity Project high school students from Atlanta went to Harvard to compete and came back with the championship. It was no fluke. They won again the second year.

Really, this is no different than what I would do for members of my team. People who feel valued and respected become energized and motivated."
By the end of 2019, Newton had been working for the Art Institute for 16 years and wanted to make a change. "I wanted a new journey. I wanted to impact communities at a higher level," he says.

One day Newton found himself in a conversation with the founder of the All for One foundation. The foundation is a global charity dedicated to changing the lives of children around the world by improving social conditions, educational opportunities, and healthcare availability. Founded by Jeff Levitan in 2002, the charity collaborates with other leading world organizations to create hope for those in need. Some of All for One partners include the American Red Cross, CARE and Save the Children.

Named CEO of All for One in May of 2020, Newton doubled the amount of money raised and increased projects around the world from 9 countries to 24 countries, rebranded the charity, increased donors and volunteers and created local credibility within the community.

"My work with All for One has been both gratifying and illuminating," he says. "I soon discovered that about 80% or orphans around the world are not really orphans but have been abandoned by their parents because they can't afford to raise them and felt this was their best option to provide them with a better future. This led us to some practical solutions."

One such solution was to shift from building another orphanage to creating a Prosperity Center, with the goal of creating a reunification program where we provide temporary home and support to these children. While we provide sustainability courses, including literacy courses, interview preparation, small trade training, personal agriculture courses, and microloans to parents or family members with the hopes to reunite them back with their families “Financial education and empowerment is an important part of breaking the cycle of poverty around the world," he says.

Virtual learning brought on by Covid inspired Newton to institute a program called Passport Around the World, in which kids in a local Atlanta classroom did virtual geography classes with kids from Costa Rica. "It's a great way to learn geography," he says. "Quite soon, the kids from both countries were telling stories about themselves and the adults had to step out of the way." Here is another example, yet again, of how Newton’s vision and leadership approach  was able to transform an organization through programs that develop and impact the lives of people.

“As a leader, I truly believe that if you do what you love, it never feels like work. As a servant leader my goal is always to inspires this in the people, I work with no matter their titles. Once this is accomplished their great work feels like tonic for their souls and they are inspired to do greater things.”

His tenure as president at All for One has been fulfilling. "I found the greater impact that I was seeking, and it was gratifying that my leadership style lent itself to the work and the amazing people here. You could say that servant - transformational leadership works well for managing projects and people at a distance," he says, "and it reaffirmed the advice that I give people who are new to leadership roles - don't let the title define you, you define the title with your impact on people and the work you do."