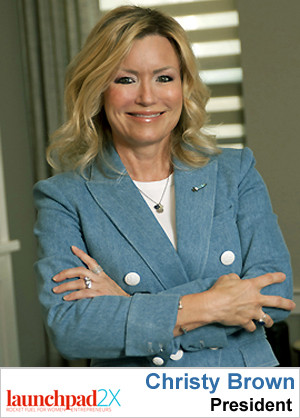 "My personal passion is investing in and elevating women and underserved founders," says Christy Brown, president of LaunchPad2X, "and our mission is all about empowering women in business."

That’s what Launchpad2X is designed to do. The nonprofit targets women who have launched a business or women who want to take their business to the next level and equip them with the CEO mindset skills to become the next generation of business leaders. They expand their expertise in business strategy, funding, networking and leadership in order to become successful CEOs.

This practical empowerment of women entrepreneurs is both energizing and satisfying for Christy. "We bring lessons in leadership from the entrepreneurial ecosystem, corporate America, the US Military, academia and professional service firms," she says, "and we do classroom training as well as individual coaching - providing the knowledge to allow women to start a business or scale and grow a business is our major goal."

Born and raised in Atlanta, Christy’s tenure at Georgia Tech led to a role in telecom where she experienced a significant scandal which opened a door to professional services. Her experience working through fraudulent business practices created a desire to build the companies where the choices and investments were hers. Being an entrepreneur wasn’t not nascent to Christy as she grew-up with founders across her family from her Grandmother as one of the first female developers and builder in Georgia to her dad who built a manufacturing facility in North Georgia. "Learning through experience with the failures of large organizations made me realize that I needed to rely on myself more and encouraged my desire to be an entrepreneur," she says,"and I learned that you can't necessarily rely on others to do the right thing."

Empowering herself, Christy successfully started, grew and then sold several companies focused on professional services, executive recruiting and staffing services. Learning by doing, she soon became acquainted with the lessons that every business leader needs to know in order to sustain and grow a business.

In 2013, Christy sold her company and rejoined the ranks of corporate America as Executive Vice President of Global Client Success. "I stayed with for five years," says Christy, "and I was happy to stay as long as I was learning something new. Fortunately, I was allowed to concentrate on a different area each year, which kept me interested."

Christy’s passion in startups, investing and emerging businesses lead to her role as the Executive Managing Partner of Loeb.nyc, a fund that invested $1 - 3 million into new companies and also provided expert help across a wide range of companies. "We created a Venture Lab at downtown at 101 Marietta Street," she says. "Unfortunately, we were slightly apart on our investment thesis for Atlanta and when the pandemic began in 2020, it was immediately obvious that I needed to steer my focus on underserved founders – especially women who were taking the brunt of the needs around this pandemic. "

In her previous venture capital role, Christy had been a board of advisor to LaunchPad2X and then joined as president & CEO in May of 2020. They were delighted to have her. “If I were to envision the perfect woman to drive Launchpad2X expansion, it would be Christy Brown,” said Bernie Dixon, Founder and CEO. “She has founded, scaled and exited multiple companies, leads with a consultative style and possesses the type of energy and vision that matches my intent to innovate and expand Launchpad2X into new markets, increase our impact and drive results.” Dixon remains as Chairman of the Board of Trustees and continues to work with Christy.

In her first year in the day to day overseeing Launchpad2X, Christy has accomplished a lot. "Programing has been expanded and our strategy is focused on women across the US rather than only one region," she says, "and we're spending more money to create online learning so that we can reach women anywhere. Women were impacted universally during the pandemic through job less, caregiving responsilbities and work burdens but we also saw more womenstarting companies at a faster rate."

Thinking bigger and broader, Christy and LaunchPad2X is helping female founders become full-fledged CEOs who can scale their businesses and sustain them. "Of course we will keep our in-person learning," she says, "but our goal is to reach 10,000 women within the next 24 months."

As a nonprofit, LaunchPad2X relies on sponsors and Christy has increased financial support by bringing in major ones. "The new sponsors include Equifax, Silicon Valley Bank, Comcast/NBC Universal, WarrenAverett, EY and MUFG Union Bank," she says.

A new initiative LaunchPad2X is looking at is a way to assist impoverished women. "We are looking at how we can teach these women to start and maintain very small businesses as a means of lifting themselves out of poverty and into sustainable entrepreneurship," she says.

According to Forbes Magazine, women owned businesses are America’s new job creation engine. Women are starting small businesses and stimulating new jobs at a rate that outdistances their male counterparts, providing a much needed impetus for economic growth. What often lacks is the skills, confidence and resources to ensure the success of these female CEOs and LaunchPad2X helps to provide those skills, which is done primarily through their annual Core Flight Program.

LaunchPad2X’s core program has graduated more than 225 women founders since it launched in 2012, resulting in more than $2 billion in economic impact to the Atlanta ecosystem alone.

Each entrepreneur develops her business strategy or investment plan for their start-up or re-launch. Paired with experienced business, leadership and financial coaches, the participants learn the techniques of networking, presenting to investors and empowering themselves for success and apply those skills and traits to create powerful presentations.

The program culminates with an individual mentor and advisory session to address issues specific to each participant’s company. Mentors may continue to work with participants after the session to provide ongoing advice and expertise.

"LaunchPad2X in Atlanta has become a hub for women across the southeast but our eye is on growth of the core program in cities such as Greenville, Kansas City, San Diego among others that are being reviewed as the next step," says Christy. "We were certainly successful before I joined fulltime, and the results were gratifying. Now we are scaling this success and spreading it around the country. There are female founders everywhere who need this."