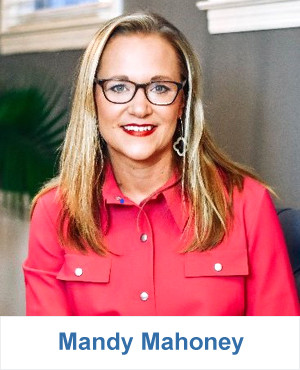 Mandy Mahoney, immediate past president of the Southeast Energy Efficiency Alliance (SEEA), is running for the District 5 seat of the Atlanta City Council.

“I am running to bring affordable housing, transparency, and sustainability to the City of Atlanta," she says.

Mandy believes that her background with SEEA gives her unique insight into the needs of District 5 constituents. "My efforts to advance energy efficiency through policy, the built environment, finance, and transportation provided real benefits to the citizens of the Southeast," she says, "and it also gave me a deep understanding of how to benefit everyone for the least possible cost."

Mandy has a strong track record of making a difference in Atlanta. Prior to joining SEEA in 2011, she worked to take the idea of the BeltLine to the first phases of reality under the leadership of Mayor Shirley Franklin. She then served as Atlanta’s first Director of Sustainability, creating the city’s first Climate Action Plan, working under Mayor Franklin and then Mayor Kasim Reed.

With a strong belief in equitable and affordable housing for all, Mandy thinks that in the long run, this is the most conservative approach to take. "My background tells me that if we want this great economic engine called Atlanta to continue its dynamic pace, then we have to make it sustainable," she says. "The City of Atlanta must take action to bring about affordable housing. We cannot reach our full potential as a community if we don't make sure that a rising tide lifts all boats. People at all economic levels need decent places to live, or employers will soon have even more trouble finding workers."

She also has another goal: "Let's astonish voters with an unprecedented level of transparency in city government," she says. "In 2021, is it too much to ask that all citizens be able to engage and examine the workings of their government? I don't think so."

"The large companies that we want to make Atlanta home are completely committed to sustainability and clean energy. If we want them to come here and provide thousands of jobs, we need to show that we are singing from the same hymn book and just as committed," she says. "I know how to formulate policies at the local level that will provide the highest degree of sustainable efficiency for the least amount of cost."

Selected to Georgia Trend’s 2016 “40 under 40” list and the Atlanta Business Chronicle’s 2014 “40 under 40” list, Mandy is also a graduate of LEAD Atlanta 2010; the Institute for Georgia Environmental Leadership 2010; and the 2011 American Council of Germany’s Young Leaders Program. She serves on the boards of the Piedmont Park Conservancy, the Turner Environmental Law Clinic, the American Council for an Energy Efficient Economy, Southeast Wind Coalition, and the Mississippi Early Learning Alliance. She and her husband Sean are the proud parents of Paul.

Mandy supported Rev. Raphael Warnock in his campaign for a seat in the U.S. Senate. She helped to write his climate and environmental justice platform and served as an organizer of the environmental community. For the runoffs, she organized a national fundraiser to support four black women-led, environmental justice organizations here in Georgia doing voter mobilization. She raised more than $50,000 for these groups.