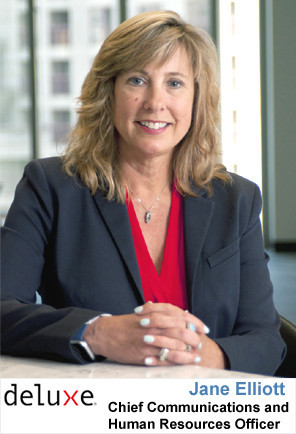 You Need a Plan

Jane Elliott, the Chief Communications and Human Resources Officer at Deluxe, has mentored many people in the course of her career and frequently starts with this advice: "If you want to get ahead in business, you need to establish a goal and then develop a plan for getting there. Without a goal, you won’t be able to get there. And it’s important to keep in mind what you want to do next and how that helps you reach your goal."

Born in Friendship, New York, a town about 80 miles south of Buffalo, Jane was the fourth of four girls, and came much later to the family. "By the time I was three, my two oldest sisters were married with my third sister married and out of the house when I was 13," she says.

The first person in her family to go to college, Jane describes her choice of accounting as being rooted in her self-described working class upbringing. "The concept of training for a specific job was understood but the concept of career was not - that's why I chose accounting," she says. "We thought in terms of jobs, not careers."

After graduating from Rochester Institute of Technology, Jane began work for the accounting firm of Laventhol & Horwath in New York city. "It was the ninth largest accounting firm in the US then, just behind the Big 8, and we had some pretty big clients," she says. "As a staff member, I had the second highest billable hours of all the graduates who joined the firm that year."

Aside from billing a lot of hours, Jane was also learning how business worked. "It became clear that what it boiled down to was managers getting the right information at the right time to make good decisions," she says. "That was eye opening for me." So was living and working in New York. "The diversity of businesses and the people I met was astonishing."

Two years in, Jane was working with a team of accountants at the corporate offices of TWA in Kansas City when they got word to come back to New York immediately. On the subway the next morning on her way to the meeting, she saw a passenger reading the New York Times and saw the headline "Laventhol Partners Are Said to Seek Bankruptcy."

"Needless to say, this was the purpose of the meeting," she says. "We were told that the firm was shutting its doors in two days." She was 24 years old.

This event presented a real fork in the road for Jane. "A partner whom I worked with a lot wanted me to go with him to Coopers, but I decided not to. 1990 was the year of the large accounting firm meltdown and I thought the better choice for me was to go to a client, in house," she says.

Jane went to work as Assistant Controller for a client in New York City, Universal Hotels. "It was interesting work. I built up a team, put financial controls & processes in place and even found an embezzler," she says, but after two years, Jane's husband got a job in Omaha. "Being pregnant at the time, I thought it best to go with him and look for work there."

Almost immediately, Jane was asked to do a tax project for First Data, as a contractor. Liking her work, they asked her to join them in the tax department, but she instead became an accounting analyst for the company. Over the years at First Data, Jane obtained more and more responsibility with expanded roles, including financial and SEC reporting. She is proud of her work with the company. "When I joined, First Data’s annual revenues were about $300 million and when I left in 2001, they were $6 billion. I've seen the growth of payments and fintech and I was happy to be part of making that happen."

Moving to Atlanta with her family in 1996 for First Data, Jane moved to Financial Planning & Analysis, later joining the Investor Relations area for the company.

In 2000, First Data moved to Denver and Jane stayed on with the company in Atlanta, but knew that she didn't want to uproot her family again. "My kids were in schools that they liked and moving just wasn't in the picture," she says, "plus I was able to stay on with First Data in Atlanta through 2001 so began to look for a new company."

Jane landed a role at Global Payments in October of 2001, working in both finance and investor relations. "I was part of the financial building process at Global Payments, which was then a $300 million per year revenue company," she says. In 2003 Jane became Vice President of Investor Relations and began a steady climb into the C-suite.

It was at this time that Jane followed the advice that she gives to mentees today. "Do things that are hard. My moving from accounting into finance wasn't easy, but worth it," she says. "Take a chance, raise your hand for extra work. Continue to learn."

As she gained more responsibility, Jane had to hire and manage more people. She shares advice on what worked best for her. "Get into the habit early of hiring people who are smarter than you are and empower them to do their best," she says. "If you want to make it to a leadership level, you have to learn how to do this. You won't have time to micromanage hundreds or thousands of people."

It worked for Jane. By the time she left Global Payments, the $300 million annual revenue company had become a $4 billion annual revenue company and Jane had become Executive Vice President and Chief Administrative Officer. "My leadership style is trust," she says. "Everyone can weigh in but then we all have to buy in. I want my people to make the right choices on their own but sometimes, as a leader, I have to help them get there."

Jane moved to Deluxe in April 2020, calling it "a scrappy company that I love. It's really a hidden gem. How can you not like the company whose founder invented the check, the first universal form of payments after cash?" she says.

Working now for Deluxe CEO, Barry McCarthy as Chief Communications and Human Resources Officer, Jane is excited about all the robust products and services that the company has and the great relationships that it has with thousands of financial institutions. "Deluxe’s relationships with banks goes back over a century and now we're leveraging these relationships to sell new tech products," she says.

"The average tenure of a Deluxe employee is over ten years and some of the people in checks have more than 40 years," says Jane. "Optimizing people with great skills - placing them where they can be even more successful - is a high priority for the company. The people feel empowered."

When Jane joined the company, CEO McCarthy had just begun the process of distributing stock to all employees which was part of the One Deluxe transformation. "All employees are called Deluxers and all Deluxers are now owners of the company," says Jane. Today, even new hires are given stock in the company as continuing the One Deluxe strategy which continues to focus on becoming a Trusted Payments and Business Technology company.

Deluxe recently closed on the acquisition of payments company First American in Texas and Jane is excited about the possibilities. "First American has referral relationships with approximately 130 financial institutions, and Deluxe has relationships with four thousand. Consider the possibilities," she says. "We also have four million small business customers and can now offer them merchant services. Cross selling is the big opportunity here, payroll services is just one of many examples."

Emphasizing that the two companies have similar values, Jane mentions that the entire First American management team is staying on. "We are all Deluxers now," she says. "They also have a long tenured workforce with a wealth of knowledge in the payments space. First American as a business platform will also serve as a great foundation for future acquisitions."

As Chief Communications Officer at Deluxe, Jane finds her biggest challenge to be developing clear, concise messaging that can be sent out in time to matter. "Is the message clear, concise and timely? That's the question," she says. "I tend to err more on the side of transparency, even if sometimes that means saying something that raises more questions. Even if not conclusive, saying what you know, when you know it allows you to avoid spin, which can be a reputational risk."

As Chief Human Resources Officer, Jane is dealing with the same issues as all companies today. "Talent is always a challenge and Covid-19 hasn't helped," she says. "If you want people to work in-person for purposes of collaboration, the employee engagement model will need to evolve, as today many employees still want to work remotely. Instilling company culture may require different and more work than in the past."

Jane's system of empowering employees seems to be working for both her and the company. Right after the acquisition of First American closed, Jane took a much-needed vacation to Hawaii - her first trip since the pandemic. When she returned her team told her "thank you for empowering us and trusting us." A fellow executive commented that "your people would go to the ends of the earth for you."

Shortly after joining Deluxe, Jane and several other leaders, led the effort to come up with a purpose statement for the company. She is proud of the selection: Champions for Business Where Communities Thrive.

"Deluxe is a refreshing environment where people trust each other and collaborate," says Jane, "and everyone is glad to be a Deluxer. Needless to say, I'm delighted to be here as well."