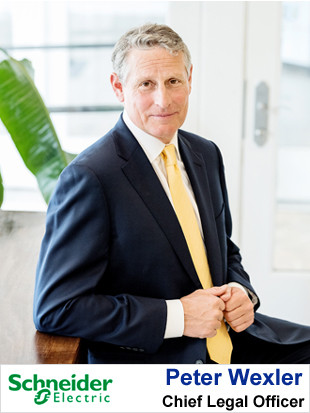 Companies change. As the Chief Legal Officer of Schneider Electric, Peter Wexler has dealt with dramatic change since joining the company in 2007. Leading a team handling more than 100 acquisitions and divestitures for the company, you could say that he piloted much of the shift himself. "Schneider is now leading the transformation of the energy business and, in the process, decarbonizing the world," he says.

Founded 185 years ago as Schneider et Cie, the French company dealt in steel, railways, armaments, and shipbuilding. In 1981, the company began divesting from steel and shipbuilding and focused on electricity. Blessed with farsighted leadership, the company then bet big that the electric business itself would change via increased energy management. This turned out to be phenomenally correct. Investors consider the €25 billion annual revenue company to be a sound investment.

"We design, develop and manufacture equipment and software for energy management, industrial and industrial and process automation, including,  electric car charging systems that drive the sustainability movement," he says. "By combining energy technologies, real-time automation, software and services, we play a key role in the world's transition to net zero."

A good way to grasp what the company sells is to look at all it provides to run a power plant: distribution control systems, the software that runs the plant, substation automation, substation software, smart meters, and safety shutdown systems all come from Schneider. "We make energy safe and digital," says Wexler.

Considered one of the smartest companies dealing with two rapid mega trends in the global energy landscape - electrification and digitalization - Schneider provides the world with a way to provision energy-poor populations with access to energy while fighting climate change at the same time. For its efforts, the company was named thenumber one most sustainable company in the world by Corporate Knights in January, 2021.

Wexler was serving as Deputy General Counsel of American Power Conversion when his company was acquired by Schneider in 2007. To make the deal happen, he personally managed a complicated European Commission antitrust review and was asked to stay on. One year later, he was asked by senior management to do an analysis of legal costs. "Legal had remained within the confines of each business and their related acquisitions, so there was a lot to consider," he says. Wexler came up with a plan to coordinate the legal function into one department, spread around the globe, and thereby save the company a lot of money. He was then asked to serve as global General Counsel of Schneider starting in January, 2009.

Then running a team of 140 legal professionals in 19 countries across the globe, Wexler's first move was to orient his people toward a global view of the company and away from single country focus. "This was a difficult task, but so worth it," he says. "I wanted the team to be highly business supportive, poised to function in an ever changing environment, and also well informed regarding how the company and industry is changing around the world."

Wexler soon began changing and improving everything that was in front of him. The number of significant litigation cases around the world stood at 600 when he began.

This was whittled down to 170 today. Litigation reserves dropped by two-thirds. Legal costs were cut by 50%. "This was achieved partly through greater efficiency and partly through better risk management," he said. In addition to serving as Chief Legal Officer of Schneider, Wexler was the architect of Schneider Electric’s global compliance program and led it for 12 years.  He is also in charge of insurance, risk management, data privacy and export control.

"I'm very grateful for the opportunity given to me and for all that I've been able to contribute and will to contribute in the future to Schneider’s continued growth," says Wexler, "I tell my people that this really is a place of opportunity - a true meritocracy."

As the company has transformed and grown, so has the legal, insurance and risk management departments. "It's been very rewarding for me to offer career advancement to my team across the globe," he says. "We have a lot of job satisfaction and very little turnover." His team has grown to over 300.

It took many corporate acquisitions and divestitures to make the company what it is today, but the emphasis on sustainability has been with them for some time. "We moved away from things such as high-voltage electrical distribution 20 years ago, focusing instead on energy efficiency, renewability and digital," says Wexler, "and sustainability is not just a buzzword for us. We've been focused on it for more than a decade."

The company has made six long term commitments to sustainability which it is implementing between now and the year 2025:

1. Act for a climate positive world -

• 1000 top suppliers reduce CO2 emission from their operations by 50%

2. Be efficient with resources -

3. Live up to our principles of trust -

• 50/40/30 gender diversity, from hiring to front-line managers and leadership teams

5. Harness the power of all generations

"We achieve ambitious goals and then we form even more ambitious goals," says Wexler, "all led by an inspirational CEO, Jean-Pascal Tricoire, who has run the company since 2006."

The company is neither afraid to make commitments nor to expose itself to scrutiny. Indeed,  Schneider was the first company to sign an agreement and provide equipment to test under the US Department of Energy’s Cyber Testing for Resilient Industrial Control System program in September, 2020. Testing began in the first quarter of 2021.

"This is a very big deal," say Wexler. "Resiliency is the cousin of sustainability and we have to make sure that our systems, especially those that support US critical infrastructure are as  safe as possible  from cybersecurity vulnerabilities in the energy supply chain."

The Department of Energy's (DOE) Office of Cybersecurity, Energy Security, and Emergency Response (CESER)directs cyber vulnerability testing and component enumeration, shares findings with manufacturers to develop mitigations, and alerts industry stakeholders using impacted components so they can address flagged issues in their deployed systems. Components with high impact, prevalence, and national security interests are prioritized for testing and analysis.

The Department of Energy's press release on the occasion of this agreement made clear that Schneider was setting an example for the industry, stating that "As one of the leading energy equipment manufacturers and software developers in the world, Schneider Electric sets a strong industry example with their participation and cooperation in this domestic and international cybersecurity effort."

"There is a lot of pride in working for Schneider Electric," Wexler says. “We will continue to lead sustainability by example within our own company, while working to provide it to others. My legal group is ready to do everything necessary to help Schneider make a better world."