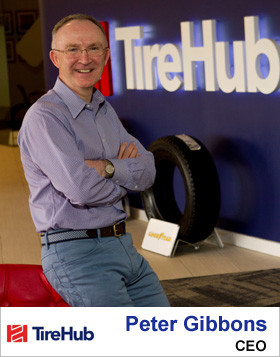 When Atlanta based TireHub was formed in 2018 as a 50/50 joint venture by Goodyear and Bridgestone to handle “last mile” distribution in the US, CEO Peter Gibbons knew that he wanted to develop a positive culture for the new entity. “Regarding customer service, our team decided to foster a culture of ‘YES,’” says Gibbons, “where every employee could always say yes, but needed permission to say no. Today, saying YES is what TireHub is all about.”

It took a lot of effort to get to this point. “We were essentially a startup,” Gibbons says of TireHub’s beginnings, “and built much of TireHub from scratch.” After six months of intense effort, he and his team converted the distribution networks previously operated by Goodyear and Bridgestone to TireHub, along with about 1,000 employees (now called Hubbers).

The effort was worth it and TireHub is the national last-mile distributor for Bridgestone and Goodyear, operating 71 TireHub Logistics Centers (TLCs) with plans to open additional centers around the US.

Peter Gibbons was born in Dunfermline, Scotland, a town about halfway between Edinburgh and St. Andrews. “We were a family of four sisters and two brothers,” he says. Gibbons attended Catholic elementary and high schools and was fascinated by physics. “I liked knowing how things really worked,” he says.

Gibbons did so well on the Scottish Qualifications Certificate, or Higher, exam that he earned entrance to Edinburgh University, one of the best colleges in the UK. Gibbons majored in physics. “Edinburgh had a first-class Physics Department,” he says. Indeed, one of his physics professors, Peter Higgs, received a Nobel Prize for his work in predicting the Higgs boson, which explains how fundamental particles acquire mass, in 2013.

Studying physics was not his only activity in college. Gibbons continued playing soccer, which he had done since the age of five, and played clarinet for the University Symphony Orchestra, which performed regularly. “I was good but not good enough to make a comfortable living.”

After graduating in physics, Gibbons did post graduate research at Edinburgh, which also allowed him to work in France and gave him a taste of living and working internationally. In 1985, he joined ICI (Imperial Chemical Industries), one of the largest manufacturers in Britain. Working in their fibers division, he scaled up new nylon fiber products and also did technical customer service. Seeing that the fibers division was not an investment priority for ICI, Gibbons to join the SDA, or Scottish Development Agency, working on economic development for Scotland. He enjoyed the work and consulting with Scottish engineering and manufacturing companies. The SDA also paid for his MBA studies.

Gibbons attended the University of Strathclyde in Glasgow and considers he got more out of an MBA than almost anyone he knows. “You have to remember – I was a technical person,” and the MBA program opened up the world of business to him. “Finance, marketing, and strategy were all new and fascinating to me,” he says.

After obtaining his MBA, ICI asked Gibbons to come back to the paints division, then the largest coatings company in the world. This was a rare thing. “ICI was an iconic company, and they knew it,’” he says, “and they told me that I had taken a risk by leaving and that my risk should be rewarded.”

The paint division had some challenges having absorbed many acquisitions. “This is where I started to do heavy lifting in supply chain,” Gibbons says, “by identifying the opportunities to transform performance.” Between 1989 and 1996, he worked on improving manufacturing across Europe, managing UK production and inventory planning and then leading Finance and IT for European Operations. Gibbons began to get a reputation within ICI as someone who could “see” the entire business and make things happen.

In 1996, Gibbons was sent to Brazil to run end-to-end operations in Latin American. In 1998, he was brought to Cleveland, Ohio along with a handful of other senior executives to work at Glidden Paint. “It was in crisis,” he says. “Morale was bad, service was terrible, and we were literally losing money on every can of paint we sold. It was about as bad as it could possibly be.” Obviously, something had to change.

Within 18 months, the company was turned around and went on to make record profits. “My family and I have been in the US ever since – we’re proud to say we’re from Cleveland.” he says. Over the next several years, Gibbons helped grow the business, modernizing and consolidating plants and distribution centers. ”We went from 15 plants to nine, 31 distribution centers to 10, rebuilt our supply chain, upgraded the IT solutions and even changed how new paint products were developed – all while growing the business,” he says.

In 2007, ICI was breaking up. “I could have stayed at one of the smaller companies,” he says, “but I never really thought about that because Starbucks came calling.” The revered coffee company was changing and needed experienced executives to help with that transformation. Peter joined as SVP of Global Manufacturing Operations and within a year became EVP of Global Supply Chain Operations. “Starbucks was exciting and contemporary but also a big cultural change for me,” he said. “There wasn’t a lot of data or analytics,” he says, “so at first I wondered how I would fit in.” Pretty quickly, however, Gibbons began to realize that there were similarities to the problems he’d worked on before. “Starbucks had its own stores and sold to large retailers, just like Glidden,” he said. “The pace and customer interactions were different, but the challenges were similar, but could I be successful in this new environment?”

Execution was a major problem, especially servicing the stores and launching new products. “We completely changed how we did both and became excellent at both,” he says. “We also built a great talent management program for the supply chain.”

What was it like to work for Starbucks founder Howard Schultz? “Howard is a brilliant communicator and marketer,” he says, “he’s passionate, an entrepreneur, and believes everything can be done by yesterday. He was always full of ideas and was never put off if one didn’t work. You have to give him credit for bringing in a new executive team and empowering them to make changes. I admire him for being able to be a turnaround leader and then pivot back into a high growth leader.”

After Starbucks, Mattel Inc came calling and brought Gibbons on board to run their global operations. “Mattel was suffering from high and growing labor costs and so we had to focus on productivity, engineering, product development, automation and procurement,” he says. He also reconfigured the product engineering function to bring new products to market faster and to bring greater focus to innovation. As EVP of Global Development and Product Supply, he had 40,000 people working for him around the world. In late 2017, Gibbons got the call to become CEO of TireHub. “It was a unique opportunity,” he says, “a chance to stand up a new entity with the intention of becoming a world class logistics and supply chain company. I couldn’t possibly turn it down.”

Gibbons and his wife moved to Atlanta in January 2018. The new company was announced in April, cleared antitrust regulations in May, and then had six weeks to get up and running before its July 3 open date. “It was hectic from January onward,” Gibbons says, “we had to find a headquarters, build out IT, including a new ERP system, develop a B2B portal, design our compensation and benefits and hire 100 Hubbers for our Atlanta headquarters, The Hub.”

Approximately 1,000 employees came from Goodyear and Bridgestone. On top of that, he needed to build an executive team and create an organizational structure that worked for the new entity. “Any startup is messy, and we had to keep our cool,” he says, “because not everything wor

ks first time.” Fortunately, the team worked through a lot of challenges in the first six months of business. The next 12 months were all about growth. Gibbons and his VP HR, Chris Smith, focused on culture from their first meeting in January 2018. “Building a positive culture was essential to the success of TireHub,” he says. “Positive energy and passionate, committed Hubbers would be key to the future of TireHub.”

At his first leadership meeting he charged the team to decide who they wanted to be, who they were not and what they must do to be successful. Quickly they came up with four qualities Hubbers would require: Approachable; Relentless; Adventurous and Speedy.

Neither Gibbons, nor any Hubber, is paying lip service to these ambitions, as a visit to The Hub in Atlanta shows. One sees highly functional teams engaged in a workplace designed for transparency, collaboration and teamwork. Pointing to one room where a vast board displays the latest sales and operations information, Gibbons said “anyone can come in here and see how the company is doing and what is important. We want every Hubber to know how to contribute to our success.”

Another area is loaded with information on three walls and room for 15 or 20 people to stand, but nowhere to sit. “This is where we talk about customers, sales and how to grow the business every week,” says Gibbons. “Everyone knows what needs to be done and what everyone else is doing. While we do it fast, I believe it builds trust between team members. There is no dawdling. Remember, we have to be speedy.”

While company culture may still be forming at TireHub, it is definitely on a good foundation. At TireHub, saying YES is the norm. You need permission to say no. Hubbers have come to feel that they are only successful when dealers win. So they all have the same goal: serving customers the right tire at the right time.

"We see ourselves as a customer service-driven business. We are building a culture around being passionate about great service and being a great partner to dealers and retailers,” says Gibbons, “and it’s been empowering for all of us. There is enormous satisfaction in doing things well, getting things right, and doing it with a smile on your face.”