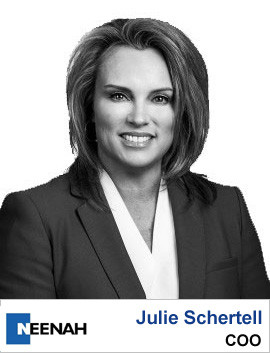 Neenah, Inc. has announced today that John P. O'Donnell will retire as Chief Executive Officer and as a member of the Board of Directors effective on May 21, 2020, and that the Board of Directors has unanimously elected Julie A. Schertell, Senior Vice President and Chief Operating Officer, to succeed him in both roles. Ms. Schertell will join Neenah's Board effective immediately.

Mr. O'Donnell has been CEO since 2011 and joined the Board in November 2010. Prior to becoming CEO, Mr. O'Donnell served as Neenah's Chief Operating Officer and as President, Fine Paper and Packaging. Her elevation will make her one of the top female CEOs of a Georgia public company.

Ms. Schertell joined Neenah in 2008, and had been President of both the Technical Products and the Fine Paper and Packaging businesses before being named Chief Operating Officer in December 2019.  Prior to coming to Neenah, Ms. Schertell worked at Georgia-Pacific Corporation, where she held increasingly responsible leadership positions in Finance, Supply Chain, and Sales and Marketing.

"It has been an honor and privilege to lead Neenah and be able to work with so many talented and dedicated individuals during my 13 years here," said Mr. O'Donnell.  "I'm proud of what we've accomplished during this time, and optimistic about the future.  Julie is an exceptional and proven leader, and I look forward to working with her to ensure a smooth transition and Neenah's continued success under her guidance."

"All of us on the Neenah Board greatly appreciate John's leadership as our CEO over the past 9 years, and we congratulate him on both his many successes and his upcoming retirement. During this period, John and his team have grown Neenah's top line by more than 5 percent annually while strategically shifting our business mix towards Technical Products, helping to make Neenah a dramatically stronger company today and very well-positioned for the future. At the same time, shareholder value was increased by almost 20% annually, more than double the rate of the Russell 2000," stated Bill Cook, Chairman of the Board. "As part of our ongoing CEO and key officer succession planning process, our Board of Directors has done considerable work over the past several years to ensure we effectively select John's successor as CEO and accomplish a successful transition. During her 12 years at Neenah, Julie Schertell has successfully led all major parts of our business, and we are very confident she is well-prepared and extremely qualified to lead Neenah in the years to come.  Our Board looks forward to working with Julie."

Commenting on the Board's action, Ms. Schertell stated, "I am honored to have the opportunity to serve as CEO and appreciate the Board's confidence in me. Neenah is a company with exceptional people and products, and I'm enthusiastic about the future opportunities we have to create added value for our stakeholders, while maintaining our commitment to capital efficient growth."