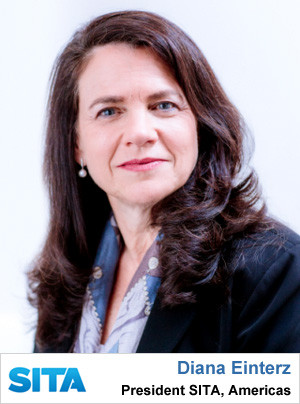 Back in the Clouds

As airlines continue to gain strength post shutdown, one person is especially excited about the role both she and her company will play in getting planes back in the air and passengers back in the airports. Diana Einterz, President of SITA, Americas, is playing a key role in shaping thefuture of air travel.

Founded in 1949, SITA - Société Internationale de Télécommunications Aéronautiques – provides IT and telecommunication services to the air transport industry. With around 400 members and 2,800 customers, it serves about 90% of the world's airline business. Nearly every airport and airline in the world works with SITA. Globally based in Geneva, Switzerland, Atlanta serves as headquarters for the Americas and is run by Diana. “It’s a given that our technology and services foster collaboration between airports and airlines, but I must say, I have never seen them work together better than they are today,” says Diana. “We are bothentirely focused on passenger safety.” With SITA’s innovation lab based in Atlanta, Diana is delighted about the new products and technologies already inthe market as well as new ones that will be rolled out to ensure the safest possible air journey.

Born in Peekskill, New York, Diana was raised in Michigan and Indiana. At 16, she studied for a summer abroad in Paris which whetted her appetite for the international. “I’ve always been global at heart,” she says. It was no coincidence that she attended McGill University in French speaking Montreal, where she studied Math, Computer Science, French Literature and Psychology.

Diana worked at AT&T for 18 years and then Equant, which was acquired by French telecom giant Orange, for another 18 years. Her last five years at Orange were interesting. “I was asked by the company leadership in 2013 to come to Paris as Executive Vice President of French Major Accounts to ‘disrupt’ the status quo,” she says. “I asked if they were sure that they really wanted disruption and they said yes,’ she says, “although later they would joke that perhaps they really wanted more French and less American disruption.” Diana felt good about what she accomplished. “The timing was right. They were hungry for change,” she says, “so my initiatives to make it safe for employees to speak up and to empower them to have fun using their skills to solve problems went very well.” The company soon had the highest employee satisfaction ratings that it had ever had while customer satisfaction and other KPIs also increased.

In 2018 Diana had the opportunity to return to the United States as President of SITA, Americas. It was a timely offer because she had been thinking that she wanted to get back home because her parents were older and she also missed her family.

SITA Americas is based in Atlanta and Diana was excited to come because she had such high regard for SITA’s CEO, Barbara Dalibard, with whom she had worked before. “Barbara is a very accomplished leader and people and family oriented individual, which I respect,” she says, “and I also wanted the opportunity to work with the technologies that facilitate travel.” Another thing that Diana loves about SITA is its diversity of people. “We are in 200 countries and our people display such energy and independence of thought,” she says, “plus it was great to be back in Atlanta near Delta and Hartsfield, the busiest airport in the world.”

SITA is owned by and dedicated to the air transport industry, and exists to provide the technologies that make air travel more efficient and the journey more comfortable and convenient for passengers. Flight information displays as well as the kiosks which provide boarding passes prior to placing luggage at check in are examples of technology provided by SITA that everyone is familiar with.

New technologies are being rolled out now to help keep passengers safer in the age of Covid-19. Smart Path is the industry’s most comprehensive whole-journey identity management solution where your face is your boarding pass. When combined with SITA’s common use technology, SITA Flex, passengers can move through an airport without ever touching a physical device.

These technologies, while already in use in some airports are more important than ever. “We actually started working on SmartPath before the pandemic but airports are now realizing the importance of taking full advantage of these investments. Forinstance, it’s already used in Orlando for the airport’s 30 international boarding gates,” she says. “With SmartPath, your face at the boarding gate is now your boarding pass. Facial recognition technology will allow everyone to go through without anyone having to touch anything.”

Another important SITA initiative is analyzing and delivering data to airlines and airports to help manage crowds at the gates. “Today it is essential that we not have too many people congregating in one area at once,” she says.

Of SITA’s 4,700 employees, many work in operations at the various airports around the world. “I like being able to visit with SITA employees in whatever airport I’m in,” says Diana, “and I do it frequently. I like to thank them for all their hard work.”

Operationally, Covid-19 had much less effect on SITA than other businesses. “We were already a dispersed workforce, scattered all over the world and connected by technology,” says Diana, “so it was an easier adjustment for us due to the technology we had already deployed.”

Nevertheless, the pandemic has had a huge effect on SITA’s owners and customers. “The airlines have taken a huge hit, obviously, and some of our friends in Latin America have gone bankrupt,” she says. “Air travel will go back up when passengers get more confidence that they can travel safely. That’s why our new technologies are so important.”

Diana believes that consumer domestic travel will recover first. “Families are more spread out than ever,” she says, “and I think Thanksgiving in the U.S.and Christmas throughout the region will see an increase in air travel. Also, airlines like Delta, with Ed Bastian, have shown great discipline with masks and not booking middle seats. This increases confidence.”

Business travel will return more slowly, Diana believes, because CFOs like the lower expenses that they are seeing today and everything seems to be working. “Eventually, though, a few business people will begin to travel and the commercial advantages they obtain from in person meetings will cause all businesses to start traveling again.”

Whenever the air transport industry returns to full capacity, SITA is helping it adapt to the current environment with a number of solutions:

• moving processes off-airport - such as travel authorization, bag-drop, mobile check in and arrival at the terminal. Passengers can arrive checked and ‘ready to fly’.

• enabling safer, easier passage through the airport, giving passengers a contactless experience, thanks to mobile, biometrics and personal guidance.

• continuing this safer travel experience on arrival and beyond, at the inbound border, bag collection, lost bag reporting and onward travel.

At LAX, SITA is providing a touchless check-in kiosk controlled remotely through a mobile device as part of the airport’s curb to gate passenger journey, and Orlando Aviation Authority has been the first to fully deploy the U.S. Customs & Border Protection Biometric Entry and Exit Program. These innovations will soon be everywhere that they are needed. “We will continue to provide vital solutions that keep passengers safe and build confidence in air travel,” Diana says, and she’s extremely proud of the work SITA has done thus far.

“I’m hoping for a faster recovery but 2021 will probably still be difficult,” she says, “but on the positive side, we’ve already hit the lows and can look forward to a growing presence back in the clouds.”

Deluxe Partners with U.K. Department for International Trade on Fintech Mission to Promote Collaboration and Innovation

Workforce Strategy: The Art and Science of Retaining Talent

THE HOME DEPOT EXPANDS REPORTING ON DIVERSITY, EQUITY AND INCLUSION AND DEFORESTATION EFFORTS