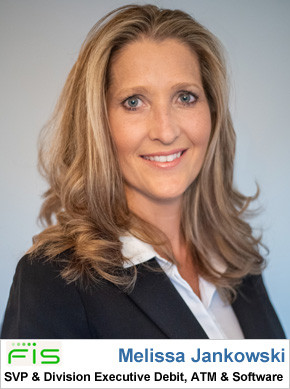 Genuine to the Core

One of the most important factors in business, as in life, is honesty. It would be very difficult to have a successful business if your customers did not trust you and it would be equally difficult to get promoted or stay employed if you were not honest with your bosses. Ultimately, honesty really is the best policy.

Integrating this concept into daily business practice has been a key driver for the career of Melissa Jankowski, Senior Vice President & Division Executive, Debit, Credit, ATM& Software, for FIS. “It’s a better way to work,” says Melissa, “and only becomes difficult when things go wrong, but that’s when you need transparency the most.”

Born in Hopkinsville, Kentucky, Melissa’s father served in the Army, causing the family to move quite often.Her teenage and college years were spent in Florida, where she worked as an entertainer at Disney World for four years (portraying Mary Poppins) and worked as a bank teller while attending the University of North Florida. At age 21 she entered retail banking with SunTrust in northeast Georgia.

Many executives in the payments industry say that they got into the industry by accident and Melissa’s introduction to payments is similar.

“A nice older gentleman often visited my bank branch and we spoke frequently. I liked this customer a lot, but I didn’t know what he did for a living,” says Melissa. “We mostly talked about our families, the weather and life in general.” After six months of these conversations she got an offer, out of the blue, to become a manager in the credit card and merchant services division of SunTrust. She turned the offer down. Twice more she was urged to take the job and both times she said no. She wanted to stay in retail banking.

Unbeknownst to Melissa, this customer was the CEO of SunTrust Northeast Georgia and he had had her in mind all along for a move to merchant services. “He explained why it would be a good fit for me and I’ve loved being in payments ever since.”

She eventually was hired in the Debit Processing Services (DPS) department of Visa, where she was introduced to the debit side of the business. Soon, she was managing regional financial institutions for Visa and after three years was put in charge of one of its largest financial institution relationships, providing consultative oversight over all aspects of the bank’s payments divisionsand certain back-office functions such as fraud, disputes and marketing.

It was while at Visa that Melissa learned one of the most valuable lessons of her business career. Her large client informed her they would be moving to a different card network. Despite internal brainstorming, there was nothing they could do to keep the business. Finally, Melissa spoke up. “I don’t think there is anything we can do to keep this from happening,” she said. “Everyone was shocked, but I felt it best to lay out the truth, even though it was something that no one wanted to hear.”

Having lunch with her bosslater, Melissa asked, why she still had a job since her job had beenwith this clientand that was now gone. “I’ll never forget what he told me,” she says. “He said that I was the only one who told the truth and that they needed more people like me. It was eye-opening. I learned that my voice matters, that I had to speak up - not be afraid to tell the truth and that integrity was important.”

In 2014 Melissa moved to Houston to run the US market payments division for BBVA. She had a team of over 20 people and P&L responsibility for an over $600 million business. She ran the debit, credit and prepaid program as well as strategy and marketingfor payments.

Melissa worked in this position at BBVA for two years. Her job allowed her to engage with many third party fintechs that were trying to help the bank with solutions. “I had to decide where to invest money and how to get them integrated into bank products. For me, these innovative companies were an opportunity and not a threat or distraction,” she says, “but it was a job bringing them on board quickly and handling compliance issues at the same time.”

In 2016, Melissa moved to First Dataas SVP, running its open-loopprepaid and payroll solutions operation. After less than a year, she was put in charge of the Debit and ATM business, including debit processing. One of her key initiatives at First Data was to publish a monthly roadmap for clients to show them what the company would be doing in the next 6, 12 and 18 months to address concerns and improve products and services.

“I spoke frankly about any issues we were having and the plans and the timeframe to fix them. When I did this, you could see and hear the tension ebb away.”

The transparency worked and their sales win ratio improved. “Customers want to hear the truth. If you tell them truthfully about where you are – even if the news isn’t good – and tell them where we are going and when we will get there, then they can be confident in making their own plans,” Melissa says. “This develops a relationship of trust so that when something goes wrong – and something will, eventually – they will believe you when you say, ‘this is going to take two more weeks to fix.’”

In January 2020 she moved to FIS, where she was given the opportunity to lead its Debit, Credit, ATM& Softwarebusiness. Melissa says “I’m grateful for this opportunity because everything that I’ve done in the past helps me see the big picture and execute on what needs to be done.”

Melissa is delighted to be where she is at FIS and determined to make sure that the company keeps its place as the world leader in delivering financial services technology. “While we are all proud to be working for the world’s largest fintech I think it says a lot about the company that everyone who works here loves working here,” she says. “You don’t get that everywhere.”

Her extracurricular family activities include the local school council board which she serves as chairman. She is also highly involved in activities at the Air Force Academy Prep School in Colorado, which her son attends.

It’s fair to say that Melissa’s personal life runs just as much on transparency and integrity as her business life and that leadership arises naturally in both. For her, there is no difference between the two, mere the way she is. “It’s just me,” she says.