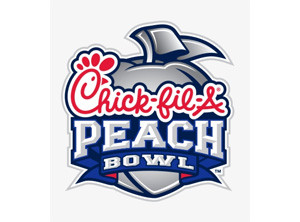 The Peach Bowl may be known for its annual college football games in Mercedes-Benz Stadium, but it’s the organization’s work off the field that has earned it the distinction of “College Football’s Most Charitable Bowl Organization.”

“Our bowl game was originally created as a fundraiser for the Georgia Lions Club, so our involvement in philanthropy goes all the way back to our beginning and it is a part of who we are and what drives us,” Peach Bowl, Inc. CEO and President Gary Stokan said.

Peach Bowl, Inc. is continuing its tradition as college football’s most charitable bowl organization as it will once again surpass the $5 million mark in charitable giving for 2022, to add to its total of $60.9 million in charity and scholarship donated and committed since 2002.

The largest donation ever given by Peach Bowl, Inc. occurred in 2019 with a historic $20 million gift to The Aflac Cancer and Blood Disorders Center of Children’s Healthcare of Atlanta.

The $20 million commitment established the Peach Bowl LegACy Fund, which is focused on funding clinical drug trials for the most promising new drugs and treatment options for children fighting cancer. The fund honors the life of Anna Charles Hollis (AC) – daughter of Peach Bowl, Inc. VP of sales, Benji Hollis – and is helping in the fight against childhood cancers.

The Bowl has also made a strong commitment to helping Atlanta students further their secondary education. Its Endowed Scholarship Program, called the John Lewis Legacy of Courage Scholarship – Endowed by the Chick-fil-A Peach Bowl, was created in 2007 and is funded by additional $100,000 gifts to the universities participating in each year’s Chick-fil-A Peach Bowl game. These donations are used to create and fund endowed scholarships for students in the Greater Atlanta area and throughout the state from Title 1 high schools who are now attending college. All told, the program currently operates scholarships at 33 universities with endowment assets totaling more than $8.7 million.

The Peach Bowl Challenge charity golf tournament provides funds for academic scholarships at the participating coaches’ schools, but it also distributes the winnings to various charitable organizations of the coaches’ choice. During the last 15 years, the golf event itself has contributed a total of $9 million in scholarship and charity.

Another educational beneficiary of Peach Bowl, Inc. is the Bowl’s academic mentoring program in the Atlanta Public School system.  The program provides an ‘academic coach’ to work with student-athletes in 11 inner-city high schools. This academic coach serves as a mentor, advocate, counselor, tutor and friend who works to assist student-athletes in maximizing their personal potential. With $150,000 committed to APS each year, Peach Bowl, Inc. is the only entity in the nation to fully fund a program like this for an entire school district.

In 2017, Peach Bowl, Inc. joined forces with the College Football Playoff Foundation, Atlanta Football Host Committee and Chick-fil-A Foundation to create a partnership with Atlanta Public Schools that resulted in the funding of a three-year, $2 million initiative to improve early childhood literacy among kindergarten through fifth grade students. The literacy initiative has now equipped 1,500 APS teachers with the skills to deliver high-quality literacy instruction to all 25,000 APS elementary students.

Peach Bowl, Inc. has also benefitted many other charities with one-time donations, many of which assisted those impacted by natural disasters. The Bowl has now donated more than $800,000 over the past five years to the American Red Cross, including a recent $200,000 donation for Hurricane Ian victims earlier this year.

Stokan is quick to point out that these successes are ways that college football, particularly bowl organizations, can benefit the communities that support them across the country.

“We are driven to do what we can to help change lives through football,” Stokan said. “Our community has always supported us and we’re grateful we can return the favor and give back to so many people who need it the most.”